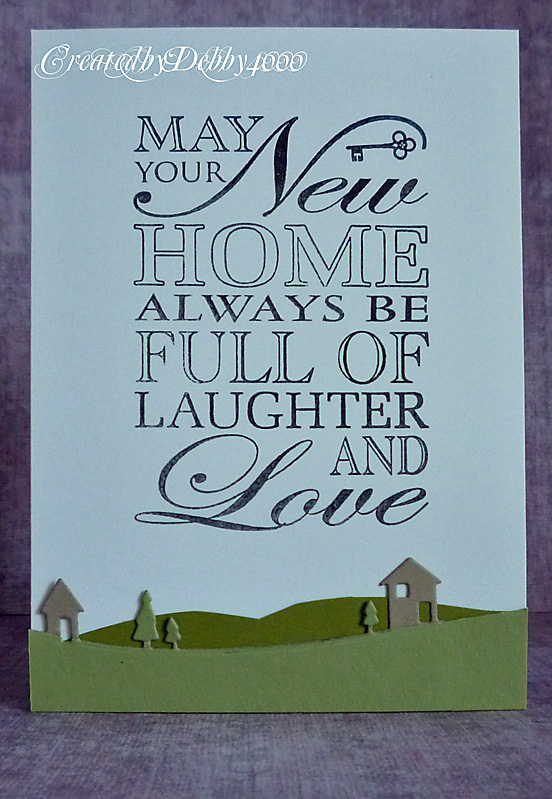 The challenge on Less is More this week is for  Mostly Words so an idea popped into my head and while making it another idea arrived in my head. Since I've lost the image of the first idea I better post the second.
It helped that I've a couple of large word stamps from Inkylicious. I did think to colour the some of the letters but I thought it would distract from the little scene at the bottom of the card. The scene is from Memory Box and some scraps of card stock.

Absolutely gorgeous, Debby! It is a gorgeous stamp, and the scene at the bottom is a perfect addition.

This is gorgeous Debby. I love the sentiment and fabulous design.
hugs Sue xx

What a Fabulous Card! Loooove those Little Houses!

this is a fabulous CAS - New Home card Debby. A great stamp too.
Lorraine

Super stunning and a fabulous sentiment
Thanks so much for sharing and taking part.
Sarah xx
Less is More

Debby, wow, this is gorgeous!! Really love that stunning sentiment and the die is perfect with it!!

Would love for you to enter the current Tuesday Throwdown challenge where the theme is "new home"...this would fit it perfectly!! :)

This is brilliant!! How I wish I had ideas pop into my head!! xx

I love this Debby..what a fabulous stamp and love the little landscape scene along the bottom..

I've got this sentiment stamp... not sure I've ever used it! Fab card, love your design :o) Hugs, Lisa x

Love it Debby! I love how the sentiment fits perfectly with the die cuts - well done! hugs,

so stunning debby.i love the scene at the moment and one of my fav sentiment stamps ;D

Your scene at the bottom is just perfect finish to this card, lovely!

Debby this is just brilliant, love the combination of sentiment and die here
Thanks so much for joining us at Less is More
Anne
LIM Designer

Wonderful Debby!
Thanks so much
Chrissie
"Less is More"

Cleverly and creatively CAS! What a treat! Hugs, Lesley