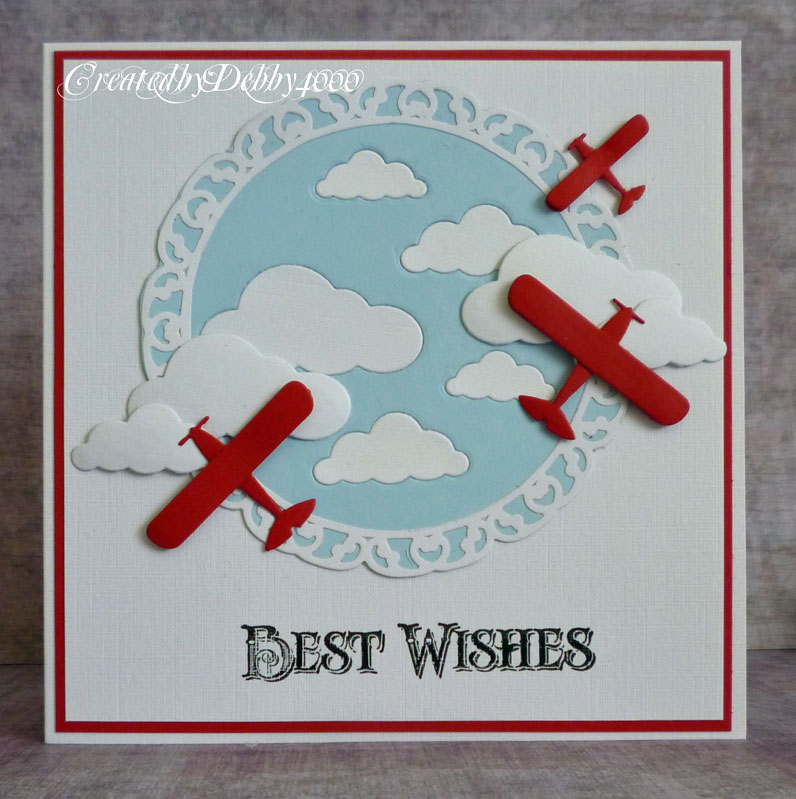 I should of been making some DT cards but decided to make a card for the Less Is More challenge although I think maybe my card is pushing the limit a bit.
I cut out my spellbinder stately circle and the used as a template to cut the blue card. Then using the Memory box clouds die I cut out the clouds before sticking the stately circle on top. Then cut out the clouds and placed them inside the cut out as well as using them on the outside.
The planes are from Simon Says Stamp but I cut out two for each plane cos I use the wings twice to give dimension which unfortunately you can't make out in the pic.
Decided to use Best Wishes that well the card can be used for other reasons not just a birthday.

this is great ! love your card ! great, the planes look that if they really fly above the clouds ! great result
have a nice day
greetings from belgium
martina
x

This is wonderful Debby, I really love the way you have cut the clouds and the red planes look fabulous.
hugs sue xx

Fantastic card Debby..love the technique with the clouds and love the planes...fabulous.

WOW Debby I love it. Its a great fun card for any man I could thing of several men I know that would love to get one like this. Xx

Fabulous Debby! I love the colour combo and those planes are a winner!
what a great card, I love it.
Hugs Mau xx
How is the new craft room doing xx

Brilliant card and love the way you have done the clouds. Hugs, Carol S.xx

WoW Debby
what a fantastic card you made! I like the clouds in blue sky :-))
Hugs, Andreja

Debby your card is gorgeous x

Love! This is fab Debby x

I really love that circle of clouds. What a great idea! You are so clever and creative!

You have some cracking dies Debby and love the idea of putting the cloud shapes back into the spaces and then piling some on the outside too. Those red aeroplanes are gorgeous. x

This is fabulous Debb, and I saw the squares you made, is there anything you can't do, and do so well?? :)

Love this Debby, so cute! xx

Super card Debby, I love the combo of inlaid and dimensional clouds!
Thanks so much
Chrissie
"Less is More"

Debby this is just fab, and enough white space I reckon :)
Love the inlaid and popped up clouds, so clever!
Thank you for your LIM entry this week
Anne
Less is More Designer