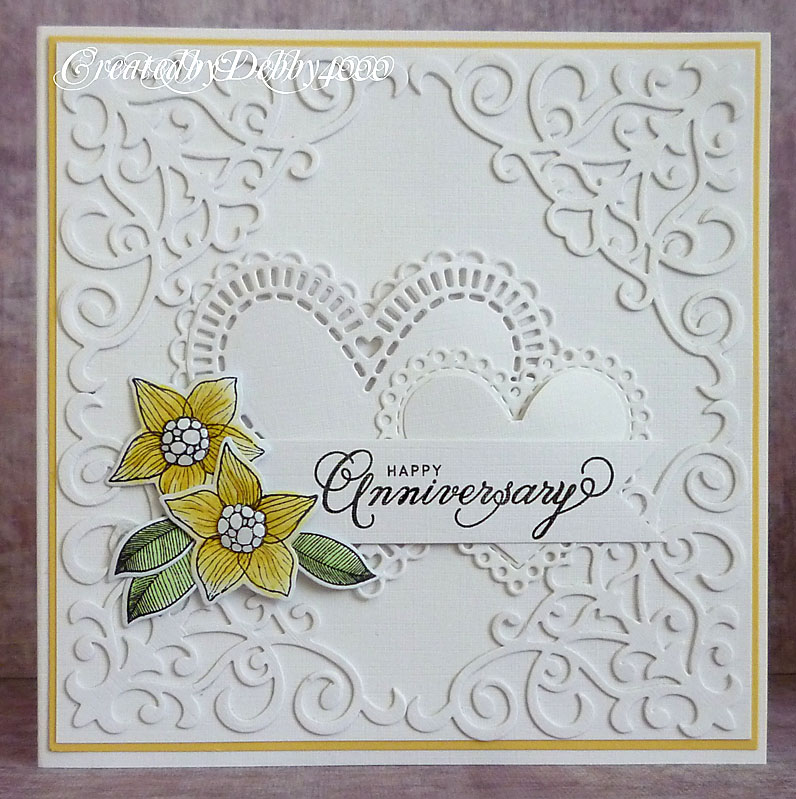 Oh dear down to my very last card in drafts so I need to make some or else there be no cards till I do. I needed a Anniversary card urgently and I saw a card similar on FB from someone called Sarah. Well I thought I could do that with my Spellbinders corners but since I wanted them in white and to stand out I cut out two for each corner and stuck them together.
Cut out my from Hearts from Simon Says Stamps but two hearts wasn't simple enough I no I had to cut out the centres and then stuck a great big sentiment on top again from Simon Says Stamps.
I suddenly realised that I used silicone glue and this card wasn't going in the post today like I wanted. So with that I added the Simon says Stamps flowers since they were already cut out and added glossy accents on the centres.
Found another card to send in the post, I really like how it turned out but do feel one my leaves drooped down behind my back.

This is gorgeous, such a beautiful and elegant design.
Hugs Sue xx

Gorgeous card Debs. Love the clean white and the pop of colour. Those hearts are just lovely. Debbiex

Afternoon Debby what a beautiful card i love it.
Debs A xx

Droopy leaves are a real pain! I am sure they wait until you are not looking! Gorgeous card and love white on white, very elegant. Have a great weekend. Hugs, Carol S.xx

So beautiful and elegant Debby.
Have a wonderful weekend.
Debs xx

This is a gorgeous anniversary card Debby, and those pretty SS flowers and leaves go perfectly with the die cut hearts, and those doubled corners. x

Beautiful Debbie. Love the white card with just a bit of colour, and the corners really set this off nicely. Hugs,

Oh Debby this is absolutely stunning, wow, what an awesome design I love this so much.
hugs
lorraine x

Methinks your droopy leaf is taking a liberty Debby! LOL. This really is beautiful though, very clean and classy. I love it.

Hugs to you Sue Pxxx

This is stunning Debby, such an elegant design.
Pauline
x

This is really lovely Debby's, a lot of die cutting has gone towards making this card so lovely.
Hugs
Cathy
Xxxx

Gorgeous, love how the corners fit together.

A gorgeous elegant card.
Have a lovely weekend
Lorraine x

Debby, I started following your blog since last fall and I even used one of your designs for my Christmas cards. Three or four months ago my computer had to be wiped clean and I lost all of the info for my blogs. I just spent several hours scrolling through "scrapbooking 24/7" which is how I originally found you. I was just about to give up when THERE IT WAS! The original gingerbread house card that had led me to you! I am doing a happy dance. I just wanted you to know how much I enjoy your creations and how happy I am to have found you once again!!

So pretty! Have a great weekend, Debby.

White-on-white is one of my favorites. You sure created an elegant card which makes the flowers pop.

Your card came out just lovely. One wouldn't know if the leaf had drooped.

A very elegant design, I love the die-cuts.
Rebecca.

so stunning and stylish debby.the white on white design is beautiful :D

Beautiful card Debby - your white based cards are always so classy :)

Such an elegant card Debby, I love your design, and dies, hugs Kate x

Oh wow this is beautiful!