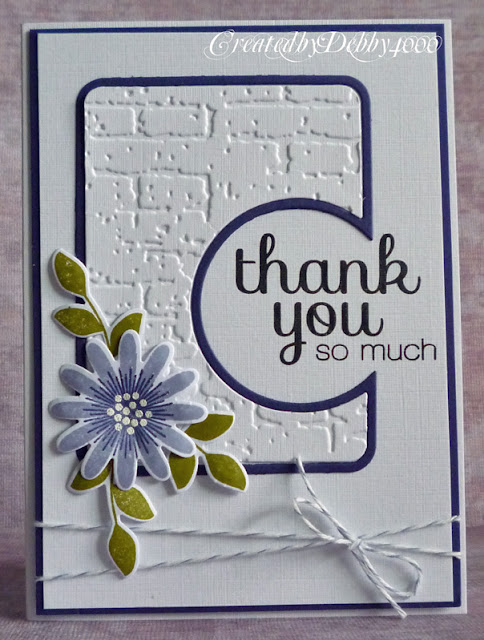 While making a card the other week I had one flower left over from a few weeks and a couple of leaves but it was sods law I had to stamp and cut out another leaf from Simon Says Stamps Flower Friend set to finish the card.
I had the waste left over from another card  which used the Circle Card Border so I decided to run it through with Bricked Embossing folder from Sizzix the only problem with that it makes it slightly smaller although with some trickery I hid the worst bit under the flower.
The sentiment came from the same set and the flower, pretty handy set to have.
See at 2 pm with the new Simon Says Stamps Wednesday Challenge.

This is gorgeous Debby I must try this technique it looks fab! Susan x

Gorgeous card, I love the flower and such a fabulous layout.
hugs Sue xx

This is fantastic! Love the whole design and the colour...

I think the brick embossing folder is going to have to go on my wish list! x

So pretty, love that flower

A gorgeous card and great design.xxx

Beautiful card Debby, I love how you have cut the circle in the embossing. I haven't seen this technique before and I will definitely be giving it atry

I love this Debby.
The circle cut out and brick embossing folder are just gorgeous, I love the way you have put the sentiment perfectly in the middle. Good Job Debbs.
Dx

Hi Debby what a lovely simple card design but it really gives a punch when you look at it, I love the die cut piece and those stamps are fabulous. hugs Shirleyxxx

Great card Debbie, love the layout especially the cut out section to show off the sentiment. Hugs Jsnine x

Beautiful card Debby, I love how you tell it as it is...lol Honest to a fault :))
Love the flower and the circle cut is a brilliant idea.
Huge Hugs Mau xx

The "bite" out of the c/s is a very cool idea , especially with the sentiment stamped in the space.

A fab design and I love the embossed background.
Lorraine x

This is so beautiful Debby. I still haven't managed to get hold of that wall folder - but at least I've found somewhere who will let me know when they get it in stock.
Beryl xx

Gorgeous card Debby :-) i love the whole design of this ,,, very clever embossing too :-)

You have some stunning ideas, love this.

Not a scrap wasted and it's a wonderful card Debby. :-)

I love your card , Debbie. How did you get the purple trim around the brick embossing. Are ther two sizes of the die?

I just love this one Debby! The layout is gorgeous with that embossing too! HUGS

Love the style of your card.