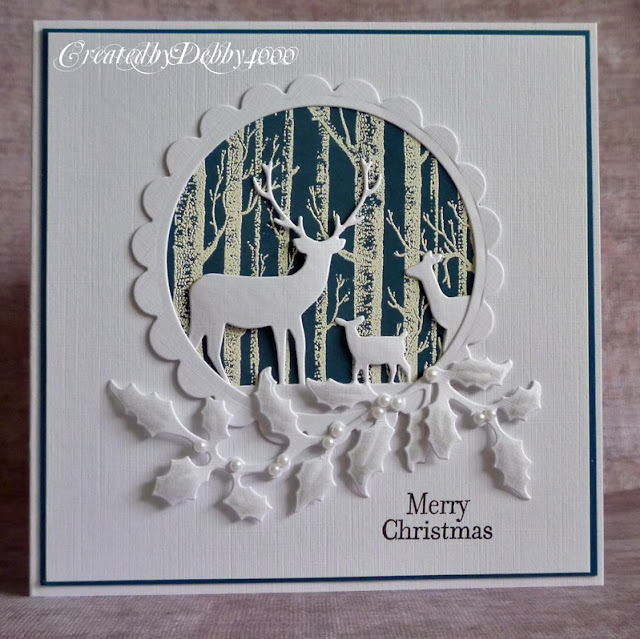 First of all I need to apologies as you can see this card is not a Penny Black one although I'm wondering if the sentiment is off a Tranparent set but I made the card a while a go and I don't think I can cheat. After swimming I felt the last few weeks caught up with me and I was exhausted, here's hoping to feeling better this morning, I have some DT cards to make for next week and its touch and go whether I'll get them done.
You probably seen that the card was made using the sketch on LIM some time ago too but although I like how it turned out the white embossed trees look cream to my startling white card and Holly.
I finally caved in and brought the trio of deer that everyone used last year and the Holly is either Marianne or Joys can't remember which but I dusted some grey to over it before I released it from the die.

Gorgeous card, looks simple but stunning. Hope my card arrived ok and you have a relaxing weekend to get over your hol xx

Sorry you're not feeling well Debby, wishing you a speedy recovery. I love the crisp white of this card and the cream tree trunks blend beautifully in the background.
hugs {brenda} x0x

This is beautiful Debby! I have both of these dies the holly is Marianne! Susan x

Stunning card Debby. I really love the design and wonderful die cuts.
I hope you have a good weekend and start to feel better soon
hugs Sue xx

This is gorgeous Debby - I love it.
Have a lovely weekend
Lorraine x

wow, you are so skilled!

C & P still going on here, but wanted to check out your lovely card.

This is really gorgeous Debby.

It's beautiful Debby. Such a lovely design.
Beryl xx

Wow Debby what a fantastic card, love the whole style of it. and white on white is just amazing. Debbiex

Wow Debby, this really is stunning! Sigh, so I had to go and buy that Deer Trio die plus one as a Playground prize didn't I :)

Been looking back over your recent cards, all are gorgeous!

Fabulous card Debby. Hope you get some chill out time and feel a bit better soon, big hugs, Jo x

Absolutely beautiful Debby, love everything about it, hugs kate x

Stunning card, Debby, hope you feel on the up soon, take care, Juliexx

This is gorgeous, Debby! You've created such a beautiful scene with the diecuts!

Don't know about 50 shades of grey but there are 50 shades of white and it so annoys me.
Another fabulous creation.

Sooo pretty! Love how you used your holly die too :)
Hope you're feeling better today.

Beautiful christmas card, I love the dies that you used!
Karin x

Absolutely stunning card, Debby! I do hope you are feeling better soon!

An amazing and elegant card!

I am loving this card Debby and want the trees and the deer, thankfully I already have the holly!
hugs, annie x

Such a beautiful combination of stamps and diecuts.
Hugs
Carissa

Just beautiful! Love those deers, the more I see them the more I want them...

Another gorgeous card and that grey dusted over the holly die is superb. So soft and just barely there!