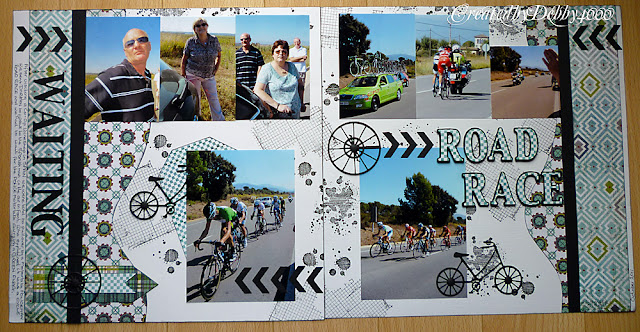 Now this looks so much better in real life but I do think making I should have inked the edges a bit more. The double layout would have been made if I was sitting with Nikki who had the grunge set from Stamping Up and just so happened to have the chevron punch. After making the layout had to buy the punch.
I used the waste as a guide to stick the loose one. I had already planned to use the Memory Box bike die but the larger wheels are actually the penny farthing die.
The papers are Oliver by Basic Grey.
You can't actually read the journalling by the photo but what it does say. That while travelling in Spain a Police Motorcyclist signalled us to pull in. We sent my Sis to talk to the occupants in the car in front who told us it was Cycling Race and we had to wait until the we seen Motorcyclist with a green flag before we could set off again.  My BIL is convinced that this is the way we should do road races here in the UK that way the interruption to homes and businesses are kept to minimum.

A gorgeous layout Debby. The photographs look fab and your design and details show them off beautifully.
Lorraine x

Fabulous double layout Debby...have not scrapped for such a long time..love all the details..

Debby, It's gorgeous as it is no need to add more ink to the edges gorgeous photos too x

A Police Motorcyclist? Wow, I've never seen one.
I love the look of these pages, how they are one big story. What is the title? I mean the alphabet.

Wow, this is beautiful! Great papers and embellishment and I love it that you've used so many photos.

It's brilliant, I love it.
Kx

Hi Debby this is a fantastic layout! Love all the details! Makes me want to scrapbook!
Hugs Lynsey x

OMGosh great scrap pages! The design and images are so perfect for your pics! Love this.

the chevron punch is just perfect for this double layout - really fab!!