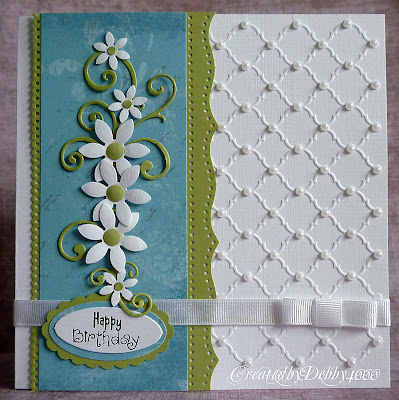 I guess this is a similar layout to yesterday's card but a totally different, this was the card I made for the blue and green challenge and then realised that there was no way it was going to work for LIM.
The embossing folder is from a company called Lifestyle who I believe was Quickutz but don't hold me to that, the folder is called Whimsy and it comes in a pack of two. It has a dot on each corner that meets up and it cried out for pearls.
I grabbed a blue bit of paper which I think is from Memory box and then the green card is from Stampin Up. The swirl is MFT and the flowers are EK Success punches and border Martha Stewart Cherish.
Well I've had a couple of pants days and my scrapbooking weekend I made one layout so much for finish Lou's wedding album and yesterday I didn't fancy cardmaking at all so rather than fight it I did some cross stitch instead.

So very nice...that embossing folder did cry out for pearls and now it looks just perfect!
Great card.

This is just so beautiful Debby. I love the birdhouses too.
Hugs
Margaret M

Gorgeous card Debby...so elegant and I love the pearls..Hugs May x x x

So elegant, Debby! I love it, hugs, Miria x

This is definaely a WOW, card as it's breathtaking and the colours gorgeous. I love the placement of the flowers on the swirl and that amazing embossing folder, just perfect.

This is so elegant!! Love the flowers and the pearls on the embossing. Enjoy your day, Colinda

This is such a beautiful card Debby!
xoxo Anita

This is stunning Debby, I love all of your little pearls and the colours are gorgeous.
Pauline
x

A beautiful card Debby. The embossing folder is fab and the pearls make it extra special. I love the piece border too.
Beryl xx

Fabulous colour combo Debby and such an elegant card.

Hope you have a good day,

Gorgeous card hun, love the colours and the embossing and the pearls finish it off perfectly! Hugs, Claire x

How many pearls hun?! What a stunning effect, it's so classy, and I adore the flowers and swirls, so pretty. Brilliant. Sxx

Hi Debby, this is absolutely gorgeous - love all the pearls and such a lovely card overall.

I was mooching online yesterday trying to find the name of one of my Quickutz folders and you're absolutely right, they are now Lifestyle.Ten out of ten!

This is a very elegant card Debby. Love the abundance of pearls.
Liz xx

fab embossing folder Debby - and I love the pearls xx

It's fabulous Debby.... and certainly NOT too many pearls!

Nooooooo not too many pearls, it's beautiful.

wow wee... what a lot of pearls, but they look amazing on this card. Love the layout.

I think LIM is what you make it, Debby. If white space determines LIM, there is certainly alot of it on this gorgeous card. It is quite minimal and beautifully balanced too. There isn't a lot of fussy stamping or loads of asymetric layers or bits and pieces hanging over the edges. I think it's perfectly LIM and I think it's perfectly STUNNING! Hugs, Lesley

Wow! Love this one Debby. The embossing and pearls are gorgeous.
Sarah-Jane xx

A pearl of a card Debby. Everything works together so well. It's beautiful
Eileen x

oh my goodness I just love those pearls! BEAUTIFUL!!

Stunning card Debby. I love the design and the way you have arrange the flowers looks so beautiful.

Beautiful card Debby. The embossed background with pearls is just gorgeous! Love all the flowers too.
Lorraine x

This is really gorgeous Debby. I have had some days lately where I have had to push myself to craft. This card has proved you haven't lost your touch even if you haven't felt like crafting.

This is just gorgeous Debby! I love the pearls on here. A perfect finishing touch!! xx

So pretty Debby and elegant xx

CAS is so underrated...this is so elegant that given the right papers it could be designed into a wedding invitation, especially with the pearls!
I must find that folder, and you are correct Debby Quikutz is now Lifestyle. It's funny how you look at a folder on the shelf in the store and think nah...then you see it used like this and your like oh my gosh I've got to have it!!
Love it Debby, and the little birdhouses too :)S

This is just gorgeous Debby, love the colours and your design is beautiful.
Hugs Linda

lovely! there can never be too many pearls =)

Gorgeous Debby,love your colour combo and the embossing folder is lovely...
Mandy x

So beautiful, love the lattice effect and all the pearls x
Wendy x

Such a gorgeous card Debby, sorry you couldn't make cards, but it reassures me even the experts get brain drain LOL

Debby this is gorgeous and you can never have too many pearls..lol..lol...

A gorgeous card Debby, looks great with all the pearls and the flowers are so beautiful!
Have a nice week!
Hugs Kjersti:)

Beautiful Debby very classy and I love that embossing folder with the added pearls. Aud x

REally lovely... and a girl can never have too many pearls! jenx

Beautiful study in blue and green, Debby. Wow what patience to apply all of those pearls. Love the LO.

Gorgeous card Debby, love the embossing and the pearls

I enjoy you because of your own labor on this web site. My mum really likes managing internet research and it's really easy to see why. We hear all regarding the compelling way you present good tips by means of this blog and as well as strongly encourage participation from some others about this concept then my princess is actually learning a whole lot. Enjoy the remaining portion of the new year. You are carrying out a great job.