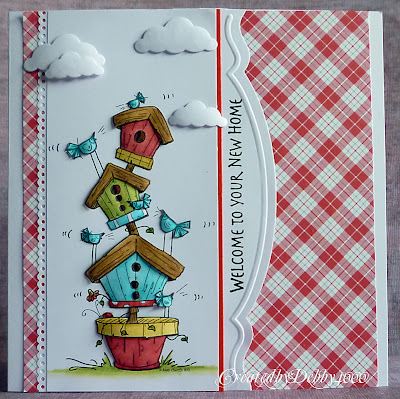 I saw a card while blogging of course I can't find it now but she use a bird house stamp not this one but  I had just brought this one from Sassy Cheryl bargain bin. Thought they would be fun to layer but the pesky birds were a bit awkward to do especially as I missed one out and had to rectify that quickly.
Now the card I saw was an all white one except the image but I thought this one would work with some check pattern paper.
The border is from Stampin up and the sentiment is from a Hobby Art set and its almost straight. Once again I've used part of a Martha Stewart border. Not sure on the clouds, all the white space above the houses bugged me so put some Memory box Clouds on, only after they are well and truly stuck did I decide that maybe it would look better without them.
Well the Olympics are now over and it was marvellous two weeks of achievement and hard work. Well done to Team GB for their excellent results and to all the athletics of the world.
But did any one notice a event that took place yesterday the Charity Shield, next week the Football Season starts.

I think the red gigham paper is perfect with those birdhouse colours!

Lvely card Debby and those bird houses are so sweet

Ohh how do you do that???? Its unfair that your cards are always so amazing!
HUgs
Tracy

Hi Debby,
catching up...
fabulous cards, loved the golfer before.
this is cute birdhouse, beautiful colouring and cosy pattern paper;-))m

What a wonderfull stack of birdhouses and the sentiment just fitts perfectly between the embossing!! Have a nice day, Colinda

This is fabulous, love that stamp.

This is gorgeous. Love the little birds and fab paper. I think the clouds look great too!
Lorraine x

Hi Debby, your new card is again so fantastic. I love the sweet image and the fresh paper.
Hugs
Melodie

What a beautiful card Debby.

what a gorgeous card Debby. I bought some birdhouse and bird stamps today, and this has given me a great idea..... Have just watched the replay of the end of the final celebrations. What a great finish.

A delightful bird house tower and the bp is just right. Love the design.
Beryl xx

Gorgeous Debby, I love that paper, the bird houses are so cute and fabulous colouring.

Fantastic card, i love the shape you give to your images and the checked paper is a perfect choice too :0)
Jenny x

fabulous card, such a great image and coloured so beautifully. I really love the layout too with that wonderful border

Your card is bright and lovely Debby, what a work to cut those tiny birds!!
LONDON and GB did a fab job, every single day was a feast, to bad it's over!!!!

Oh this is just gorgeous as usual, what a beautiful job. How long do each of your cards take to make - you must spend hours on them?

A gorgeous card! A lovely image and your layering makes it look even better!! Lovely design as well! hugs, Marlies

Hi Debby, this is fabulous and the clouds are perfect. Love the shaped border too and the paper is fab.
Hugs Sue W.

What a gorgeous bird house Debby, your card is stunning xx

You didn't think I wouldn't notice the footie did you??? LOL I didn't want the Olympics to end really... but paralympics starts soon so the sportie fix will continue!!
Great card - the check papers are perfect for the image - sunny and bright- just what a new home card should be!

Fabulous Debby, love your design layout, and that image is adorable.

Fab card Debby. Love the image and it goes so well with the red paper.
Sarah-Jane xx

what a lovely card.

Just perfect! I love the checked paper, and that adorable image. You always make me go "ooooooooh!!"

So perfect for that golfer in your family. Debby it is so perfect you have such a knack for colors!!!

So cute Debby and I love your layout! Chris xx

Gosh Debby, I don't come over for a couple of days and I miss so much, you have made some gorgeous cards, these little bird houses are lovely and they do go so well with your check paper.
Pauline
x

Great card as always Debby. Love your take on a new home. Love the layout and design
Eileen x

OOOhhh loving this!!! its a perfect new home card and as always loving the decopuage sweeets, beautiful huggies June xxxxxxxxxxxxxx

Its a fabulous image. Love your colourwork and your layering is sublime. I loved this so much I dashed over to SC to buy it myself but it's not in the bargain bin anymore! Hugs, Lesley

this made me smile Debby, gorgeous shaping on the image panel and loving those clouds, just ordered myself some think they are ace
Hugs Kate xx

That is so cute ! I love the little bird houses!

I've missed 6 of your cards only by commenting though LOL as I get your follower emails, FABULOUS cards as always Debby, love how that little border is perfect whenever you use it so neat.

What a great image! This is absolutely fabulous Debby!! xx

This is a brilliant card Debby. Love the stacked houses & your choice of bright colours for them.

That's fab. Love that paper too :)

awww... this is so adorable, Debby! love it!

Oh this is fabulous Debby I love that quirky image also the wonderful paper and that embossed border it looks terrific.
hugs
Lorraine x

Wow what a little beauty i love the cute image and the papers are gorgeous. luv gina xx

LOVE this one too! LOVE the way you did the bracket also! hugs me xx

Oh my word Debbie, I love everything about this card. How awesome! Hugs Sharon xx

Super lovely, Debbie. I think the clouds are a perfect addition to the beautifully colored birdhouses.

Those little houses are precious and I love the shaped panel. Great design Debby!

Wow! This is just my cuppa tea. Love it Debby.
Luv, Babs xo

Ohhhh...what a lovely card!
The little stamp is so cute..
Fantastic is your card,Debby.
hugs
Swaani