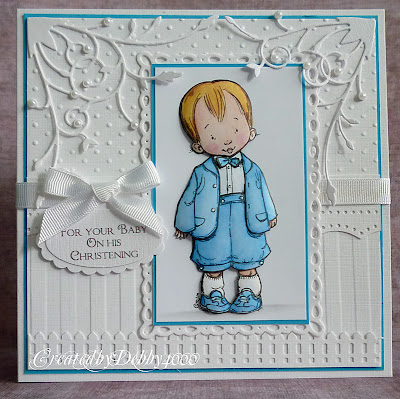 So Mr Mojo was watching the games while I was trying to make this card. I had no problem colouring and building up the layers of the Baby in a Suit from Mo but making the card became a work in progress.
I used one of the Romantic Rectangles from Spellbinders, the embossing folders are Swiss Dots from Cuttlbug and the stripes from Stampin Up.
For the border is was Martha Stewart border and I decided on the corner from Memory Box to begin with a used one as you can see from the card below but there was something just not right.
The following day I added the Picket Fence and I wasn't really happy with the words for the sentiment but I still wasn't really happy with the card either.
I changed the sentiment when I completed the others and then decided to put another corner on with a couple of discreet snips of the scissors I made it fit and added the the pearls now I almost like the card. 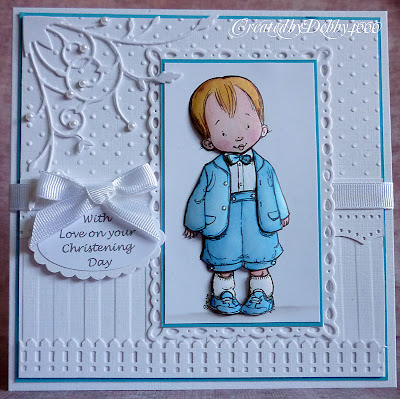 so gorgeous Debby, I like both versions. The image is so lovely and your colouring and layout is beautiful

I hope you have a good Sunday
Hugs Sue

What a beautiful card Debby,I love the image and the colours.

They are both perfect how couldn't they be with the charming chappy in his suit.
Hugs
Margaret M

Gorgeous image Debby. Both versions are wonderful but the two corners looks awesome.

Beautiful work, Debby! Love all your textures and this handsome little guy really pops in more ways than one! Hugs, Lesley

Love that little cutie Debby... and gorgeous textures in the white too!

Oh Debbie .. this is adorable.. i ove all the whote embossing
Lisa x

Debby you make so many awwwwww cards and this is another one. It is gorgeous. Love the image and the embellishments you have used. It really does it for me
awwwwwwwwwwwwwwwww
Eileen x

Love both cards Debby. The lil' fellas is so darn cute all dressed up in his Sunday best!
The sketches and papers are simply FAB!!

Such a beautiful christening card Debby and the dies and image around it are stunning, xx

Beautiful card, love your before and after picks,
Hugs Debs

Wonderful card, Debby! I love the embossing and diecuts and darling image! Fantastic coloring and dimension!

This is such a pretty card - I am inspired now to use the pieces I have like some in your creation as I have been saving them! You have created beauty once again. Wishing you well.

That sounds just like me when I'm making a card :) Colouring is usualy no problem but then I have to make the card...
What an adorable card, love the second one! Enjoy your evening, Colinda

A gorgeous card Debby, love the embossing!
Have a nice week!
Hugs Kjersti:)

both so stunning debby.fab white on white designs and i love the image :D

Thank you so much for dropping by and leaving me some lovely comments, they are very much appreciated.

Have a great week.

Oh Debby this is awesome an excellent Christening card that image is so sweet,l the die cuts and design look superb.
Hugs
Lorraine x

You are too funny...I love them both! But I always love every one of your cards.

Both versions are beautiful Debby - so thanks for showing both.
Beryl xx

I love the embossing... especially the stripes, so versatile (mmmm, another thing for my wish list!) cute image, and I do prefer the sentiment on the updated version, I think it suits the lovely tailored look of the card. TFS, Donna ♥

I love both versions, Debby. So glad to see the evolution of your cards. TFS.

Thanks for your article. I have generally observed that the majority of people are desperate to lose weight as they wish to appear slim in addition to looking attractive. On the other hand, they do not generally realize that there are other benefits just for losing weight also. Doctors insist that overweight people come across a variety of disorders that can be directly attributed to their excess weight. The great thing is that people that are overweight in addition to suffering from a variety of diseases can reduce the severity of their illnesses by means of losing weight. You possibly can see a slow but noticeable improvement in health while even a bit of a amount of fat reduction is realized.