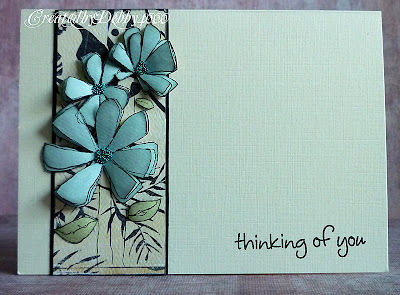 So I've tried to avoid checking out the entries for LIM before making my card cos I always find cards that I want to case and then it wouldn't be my idea. But I follow some fellow blogs who join in  but this card is what I first thought off which is typically me and I'm dead chuff that I managed to cut into some sheets of paper that I've had for ages 2006 in fact since I made a Trash Book with Kirsty Wiseman.  Good job the plain colour was teal cos that was the colour of the accent beads I had for the centres. 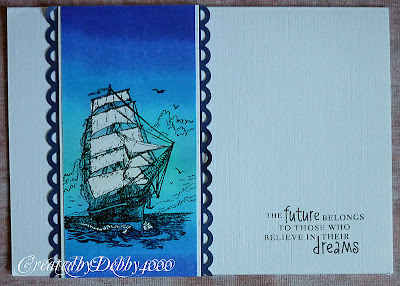 Now I saw Jenny had made a scene on her strip which I thought was so cute and while I was looking for the floral stamp I used for the first card I saw this old ship stamp and I thought it would make a great scene strip. Now I used a brayer yes I did say brayer but this strip was one of the best and luckily I was able to cut off the awful bit once I stamped the stamp. I then embossed the ship with clear embossing powder the reason for this is I used a technique I saw Kim Reygate demo at Newbury Stamp show years ago. Using neat bleach I painted over the sails and watched the amazing transformation of the blue sails to white.
Then came the arrival of some Penny Black London stamps and I've quickly made a card which I'll post later.
Before I go I want to congratulate to the girls of Less is More Challenge for a whole year of LIM challenges .

Loving these creations. The sail boat one is such a beautiful one for a man.
Hugs
Desire

These are both gorgeous Debby. I love the dimension in the first card.
I was interested to read about he bleach... I'd never thought of using it on ink... only on plain coloured cardstock. I really must have a go. Thanks for that.
Thanks also for your kind words about our blog we have been delighted with how it has developed over the past 12 months.. here's to the next year!
Thanks so much Debby.
Chrissie
"Less is More"

Did you say Neat Bleach?! OMG I'd be terrified of trying that technique lol!

Lovely cards Debby, I'm always awe'd by the LIM style, you make a great job of them.

Have a great day
Berni x

Both your cards are stunning Debby, I love how the flowers pop out on the first one, hugs x x

Beautiful entries for the LIM-challenge! Especially the one with the ship!
xoxo Anita

Wow both gorgeous Debby and I love the boat card!
Hugs Heidy

Your cards are gorgeous!
I love them!
Hugs Gisela

WOW these card are both fabulous! Love the bleach trick, will have to give that a try :)

Morning sweetie these are just gorgeous, love your colours especially the shop one amazing ♥ Pops x

The first is so feminine and delicate, gorgeous and the second is perfect for a guy - love them, Debby!!!

Hi Debby, two wonderful cards. Love the flower one, but the ship is just stunning!

You wouldn't catch me with bleach near my papers tho - I'm too clumsy and it would be bound to spill!!

Thanks for your congrats Debby, we are chuffed to bits!
Your cards are stuinning, I have that very stamp [ the flowers] on my desk right now!!
Both superb, wonderful techinque on the sailing one

Thank you so much
mandi
"Less is More"

These are terrific debby - think the neat bleach idea is a great tip and one I'll be trying...carefully!!!!

I like both of these Debby, a lot!
hugs, annie x

wonderful cards, love the ship one and 10 out of 10 for the brayering!!
Diane

Two more stunners to add to your list! Love that first one Debby
Hugs Laurie xx

Very elegant. Your cards are fantastic.

BEAUTIFUL cards!! I especially LOVE the first one...those flowers and the colors are stunning...LOVE IT!!

These are both so wonderful.

I thought I had commented on these but looks as if I haven't sorry.
They are both great entries and the ship one is very clever but the flower one is using my favorite PB stamp so I have to like that the better of the two.

both so stunning debby.gorgeous designs :D

These are both gorgeous Debby, I love the dimension in the flowers. I remember Kim teaching us about bleaching inked areas in a class I attended at Sir Stampalot many moons ago!!
Jenny :0)

I love your LIMS! Mine are usually pants. I'm gonna have to CASE you and have another go! Great tip with the bleach too - your ship card inking is stunning and I love your floral make! So pretty! Hugs, Lesley

Wowww awesome cards what beautiful designs, I rather like that ship and those flowers look wonderful.
hugs
Lorraine x

Gorgeous colours on both cards and the popped flowers are perfect.
Heather T.

Even with "less is more" cards you succeed very expressive works to create.
Hugs
Melodie

Just love the less is more card with the flowers. Beautiful!!!!

LOVE both cards...but that second one steals the show! I'd love to know exactly how you did the bleach...looks so cool!