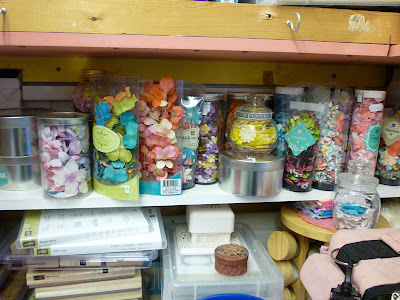 Today on WOYWW I thought I show my problem area, my flowers. Nothing wrong with the flowers its the containers, you can work out there is a hook above them and usually there are thing hanging there and there's another to the left. When I need the stuff hanging somehow it knocks one of the flowers which then sends several crashing around me. Also when I need to plug in my heat gun again the flowers crash around me.
So just when my hubby thought I had enough really useful boxes it looks like I shall be collecting them again. 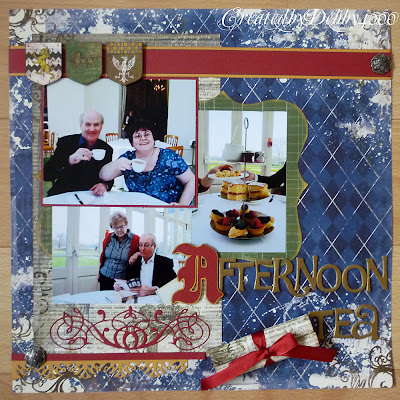 I'm doing a sketch challenge at the Scrapbuddies crop this weekend, I use one of Pagemaps sketches the one I used is actually in the archives. I make a layout so there's a real life one at the crop as well as taking the pic of the example from Pagemaps.
The papers are Bo Bunny Cambridge which I brought ages ago from Simon Says Stamps just needed time scrapbook with it. The swirl is Memory Box guess you'll be seeing that on a layout again, the A is cut on the cricut using Blackletter font. In the scroll is some journallling about the day the pic was taken. 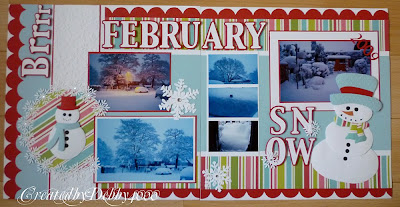 Last October Janet taught this layout at the crop she told us it would be quick, she lied I was making this, the whole time at the crop and it kept me quiet all day too.
I finally got around to finishing it but next day when I put the templates in the safe place I need to write a note to myself where that safe place is. Took me nearly a hour to discover it was in my pink bag pocket the whole time. 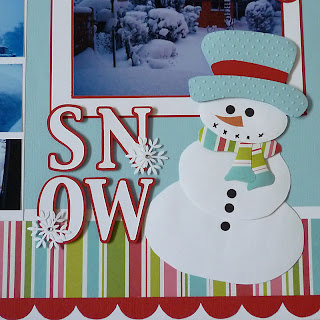 Couple of close ups of the Snowmen, the bottom one had to be redone, when I made him originally I punched out the eyes with the same punch as his buttons but it made him evil looking, you can't have a demon looking Snowman now can you. 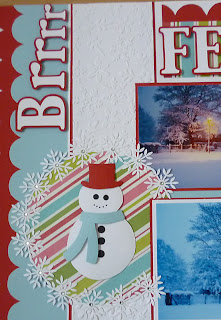 Fabulous layouts Debby, love the swirl on your first one!
Happy WOYWW! Debxx #115

You can never have too much storage I think and I can certainly see your problem. Love your layouts. I remember when you went for afternoon tea. That scrill isgorgeous and sets off the photos beautifully.

Gorgeous LO's Debby :-) I really enjoyed reading this write up ,, made me laugh :-)

as for the flowers, I bought a stack of drawers and throw them all in there ,, they're under my desk and out of the way ,,, its ribbons that are in a mess ,,I need to do something with them ! maybe buy another stack of drawers and colour coordinate them ,,, hmm there's an idea ! :-)

hope you have a lovely evening and enjoy the crop :-)
luv
Lols x x x

Gorgeous layouts - I love both of them

Gorgeous layouts Debby, I love the snowmen and the colours.

Great pages. I use rectangluar plastic kitchen containers with snap on lids, I pop all flowers into them in their colours. So when I want Pink flowers I just pull down the one container. Only problem is keeping track of the manufacturer. Sometimes it's a tradeoff!

Love the layouts, brilliant....as for the desk, oohhhh no I don't want to think about it at all..lol..xxx

Really great scarapbook pages, well laid out and love the lettering.
My flowers are in draws.

great pages Debby, especially the one with the cakes! and loving your pretty punched snowflakes - I need that punch, who's is it?
hugs, annie x

Love your Layouts and that snowman is adorable!

Both layouts are fantastic. I have just started and promising to do more with my photos this year. Dedicating one day a week to scrapbooking. Hope I get as good as you
x catherine

Love the layouts hun I really should learn how to scrapbook now.

This is GREAT Debby!!!! I went to an Auto parts store and got a plastic container that has compartments (like a fishing tackle box kinda) and I use that for my flowers! It is a double sided one, so they are ALL in there...top is clear so I can see them! AND it has a handle!!! LOVE IT!!!!
Hugs,
Chris

Denny, I love your scrap pages!! It makes me happy to see that others scrap. I love making cards, but I really love Scrapbooking! I don't often leave comments, but I see all your posts and your ca,RCA are always beautiful. I'd love to know how you get so much dimension on your cards!

I have a tall wooden set of drawers I got from a car boot for a tender it is not wide more cube shape and 8 drawers high I keep my flowers in that in the colour schemes works great for me as I just go to the drawer with the colour i need.

Any way layout is fab Hun

Dear Debby! The same problem I
also had! Then I went to Ikea
... where you'll find many storage
Opportunities, I've bought at Ikea those jars with lids in different
sizes!! Click here please
http://www.ikea.com/de/de/search/?query=++Gl%C3%A4ser+mit+deckel

Love the L/O's
I'm seeing how many I can get round this way.then when I have finished I'll come back again, that is if I can STOP reading all the posts first Happy WOYWW

I have the perfect solution to your flower problem. . . send them all to me he he!!! Love your layouts so so beautiful x x x

Your pages are gorgeous! I can see why the swirl will be used lots. We just can't have too many Really Useful Boxes can we?? xx

Beautiful LO's, I have that MB die too but haven't used it yet. Lots of pretty flowers, but the storage of these things sometimes becomes difficult. I've asked Hubby to make me a couple of shelves for more storage.

Great layouts, Debby. I like that you have a good selection of for the Afternoon Tea layout ... I wish I had that kind of foresight :( Hope you find the ideal solution for your flowers soon. Have a great week. Elizabeth x #96

Ah dee by, I have stopped using the pockets on my tote for exactly that reason, how funny!! I love the LOs..I find at crop especially, the 'teachers' always lie about the speed for making stuff!! I think the flowers problem will be solved with a RUB.....and a resolution to use them up, ha ha !!!

I really like your pages Debby! Hope you get that storage situation sorted out soon! We don't want you wasting time on that kinda stuff!

You can never have too much storage and there is always never enough lol Great scrap layout. xxxxxx Amanda