LIM Cut it Out 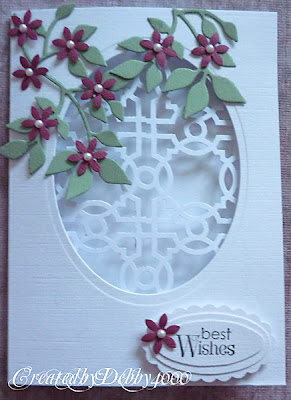 Well these were an absolute pain to photo, especially the white ones so these are the best of a bad job. Today is the last day to enter Less is More cut it out challenge so I thought I had better post the ones I've done. The problem is having checked some entries I wanted to have a go at making some of them.
My first is probably the one that came to my head when I first saw the challenge using the square anywhere punch from Martha Stewart, don't you hate that chap on the TV selling them he makes it look so easy again this was the best of a bad job. The leaves are my favourite Sizzix die and use it a lot in scrapbooking and the flowers are punched ones again.  That just leaves the stampin up sentiment and punches. 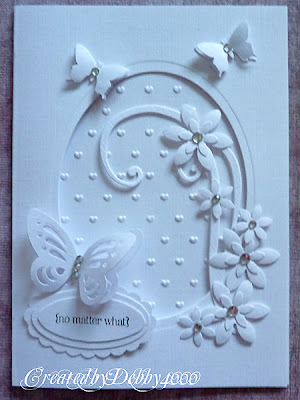 So having seen the gorgeous white cards that Chrissie and Mandy have made I had to make a version too. I have used the heart embossing folder inside. I've used various punches and the Magnolia swirl die. 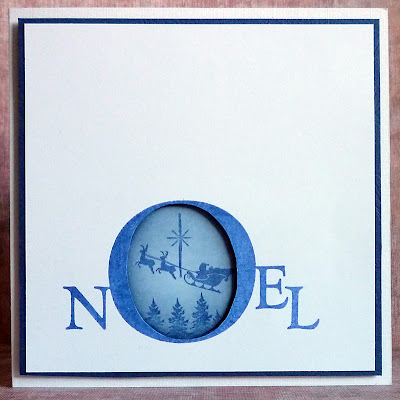 I've never seen Barbara from Clarity use their stamp but I saw a card on someones blog and I had to have the stamp. As you can seen I cut out the O and used it as a template for the scene I made, which I then used sticky fixers to give it depth behind the O. 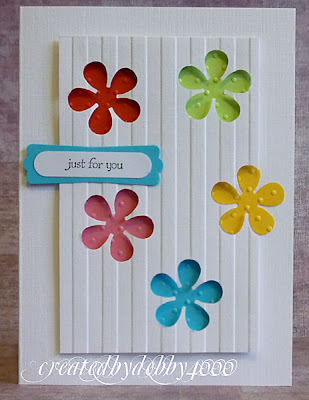 I saw this card  and I just had to have a go but I didn't want it to look completely like the one I saw. I used a stamping up folder and punched a flower off to the side which is similar to the Christmas card my Stampin Up friend Nikki made. I can see now I've found the link that I could've used some gems in the centre.
I've got a weekend at home just got to make a couple of cards today and then I've a weekend of Scrapbooking

These are all just so pretty. Love them.....

These are all fab. Love the first one but do adore the completely white one.

Love the white card and it looks so elegant and stylish. Mine always photo as if they are blue.
You have done a really nice job with the Noel card and it really stands out nicely
x catherine

oh wow they are all amazing.. i love the NOEL one particularly
Lisa x

Your cards are amazing and gorgeous.
luv
irene
xxxx

What a fabulous array Debby!
They are all simply gorgeous and to try to choose a favourite would be a fatuous exercise!
Love 'em all!
Thanks so much
Chrissie
"Less is More"

Wonderful Debby! Love them all. Have a fabby weekend xx Jenny xx

Wow Debby you were certainly on a roll with this challenge...a gorgeous set of cards..but your first is my favourite#

Wow, fabulous cards Debby!! Love them all!
Have a nice weekend,
Martha

They are all wonderful cards Debby, love them all but must say I do love what you have created on the Noel one, just beautiful. Carolxx

Four beauties Debby, my favs are 1st and 3rd but all delicious. Hugs x

Hi Debby. Not only one but four super cards. I love the white on white, but I think my favourite has to be the 'Noel' one. I love how you have cut the O out. Fab little background scene too.
Love Sheila x

HI Debby. Wow. Absolutely love all of these cards. Donna

What gorgeous work debby you have been busy! Hugs rebekah xx

WOW!!! I love them all, there simple but so very elegant!!! Hugs, Brigitte

WOW!!!! All your cards are stunning and I love them all. I struggled to make one card with a cutout:) hugs x x

Hi Debby,
These are fantastic. I love the cut outs but the lattice on the first one is my favourite. Brilliant work.
Hugs,
Fiona x

Debby these are all fabulous, but must say my fav. is 2nd white one.
Just beautiful.
Avril xx

They are all fab - if I had to choose, the white one is my favourite closely followed by the last one with the bright flowers x

Wow they are all gorgeous and yet all so different too, Luv Sam x

These are all fab Debby, just love the second one.

Wow Debby - these are just fabulous. Love them all.

These all look brilliant to me Debby and I love the trellis work behind the first aperture :)
Have a happy scrappy wkd !
Jenny x

All fabulous cards - glad to hear that I am not the only one struggling with the punch anywhere punches.

WOW......beautiful cards sweetie. Love them all!!

These are all fabulous Debby, my favorite has to be the first one
Kevin xx

LOVE them ALL! Fabulous makes, Deb!

Wow debby gorgeous cards and I love the way youve designed your cards the apetures are fabulous. hugs Shirleyxxx

wow for every one of them just gorgeous
Hugs Kate xx

Love this card. So bright and cheerful!!! TFS

Your card is so beautiful Debby:)) My favorite was the white one:))
Have a lovely weekend!
Hug from Inger Marie

Wow Debby these are all beautiful.
Diane xx

Oh I love them all!!! Your WOW card is amazing!

Wonderful selection of Cards Debby love them all!

Have a great weekend.

Wow your cards are beautiful.

Great cards. My favorite of this is the fourth

Hi Debby, these are just gorgeous, just as beautiful as your other cards that you do. What pretty colours in the flowers.

Wondered if you would mention my blog on your next post, I am raising money for Ruth (you may have heard her on radio 2 this week) We have a first prize of £40 to spend on Stampin Up, 2nd is £20 and third prize is SU goodies. All we are asking is for a donation of £2.00 to be in with a chance to win. The story is over on my blog and I would really appreciate a quick mention. Hope you don't mind me asking.

Now isn't that funny the previous commenter said her favorite was the 4th but it the one I didn't care for, but I thought the others were just stunning.

What a lovely selection of cards, not sure I could pick a favourite. Love the leaf die on your 1st card and the Clarity stamps with the large O are some of my favourites and love the bright colours on your final card :)

A beautiful collection of cards Debby, they are all wonderful.
luv and hugs {brenda} xoxox

All your cards are gorgeous Debby...I love the all, so elegant.
Debbie x

These are all fabulous Debby, the first is my favourite!
Helen x

Gorgeous creations Debby - all of them!
Have a nice weekend!
Hugs

Hi Debby, these are all gorgeous. My fave is the first. Very pretty fretwork.

OH wow Debby..... four absolutely fabulous ones!! I can't choose which I prefer because I love them all!
Hugs
Christine x

Wow Debby, these are awesome... all so stunning, elegant and all having that WOW touch. Thank you for the inspiration. Hugs xx

Simply stunning creations! Love them all

Wowww Debby these are fantastic and so beautiful the cut outs look great and what wonderful designs, superb work.
hugs
Lorraine x

All gorgeous Debby as always!

Beautiful cards!
And I also took a look at the earlier cards you made lately and the are too very gorgeous.
Hugs, Sandra