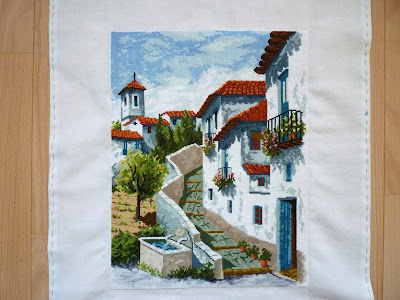 Back again like a bad penny but since this is a diary of sorts of my crafty creations I need to record my lastest finished Cross-stitch
Everytime I go to Spain I try to pick up one their Cross-stitch magazines even though in Spanish its still squares of colour and list of numbers and easy to work out. But apparently I have these magazines and I was informed never used them so I decided to remedy this by making this scene that was in one of them.
Its quite a large project but there were quite a bit of large areas of the same colours except for the pesky trees.
I have no idea how many man hours it took especially the occasions I've had to unpick some of it and to be honest I don't what to know.

oh wow its beautiful. I can almost feel the warm sun on my face
Lisa x

This is gorgeous Debby - such a lot of work. Haven't done any cross stitch for ages and have loads of mags and kits still waiting to be used!! Seeing this makes me feel I might have to start again :0)
Hugs
Denise xx

It's a lovely Spanish scene Debby which reminds me of fabulous hot holidays! That you manage to do something like this besides your gorgeous cards is amazing!!!

It is really beautiful!

Just beautiful Debby I have pulled one of my old cross stitch pics to finish off too I have so many I want to do and half finished projects, it's about time I did something about it. Great inspiration thanks for sharing!

Hi
What a beatiful work... I know this takes hours and hours to make. It's also a very nice picture.

Hi hun
oh wow this is beautiful must have taken hours, i use to do a lot of x stitch, very time consuming worth it though, sue.x

This looks fabulous hun I'm terrible for not finishing my cross stitch projects.....I have quite a few on the go lol.

gorgeous, well done on completing it, I have many half done, haven't picked them up in years! hopefully one day I will finish one or two!
Debxx

Debby, this is certainly worth all the hours you have put into it. It's a beautiful scene, and must put a big smile on your face every time you look at it.
Hugs, Clare x

Wowzers ma lady!!!
what a wonderful work of art - clever you!!
i bet you would like to be somewhere like that eh!!
it is beautiful you should be proud of yourself x
hugs
Suzie qx

Hi Debby,
Stunning piece of work.
I do cross stitch, the Lavender and Lace designs. My last project of the 3 girls flying kites took me 2 years.
Looks lovely framed on the wall though.
hugs
Marion

Lovely scene, I can tell it looks like a lot of hard work but worth it by the result.

This is a fantastic finish. well done
x catherine

This is beautiful Debby. It looks soo realistic, like a work of art! I could almost imagine myself to be there!
Hugs
Vicki x

This is stunning, you must be really proud of it!!!

Hi Debby, This is So beautiful:) Sandra H

You are so clever! It must have taken ages. xx

Hi Debby,
What can i say, except "WOW" !!!
What a great job you have done on this - wish i could report such good progress with my own but have to confess that i've not touched it for a while.
Mind you, i think yours has given me some encouragement to keep going with mine.
Super job!! :-)
Mike.

This is absolutely gorgeous.I can imagine how long it took to make as I did a x-stitch that took me 4 years obviously more off than on. It does have pride of place in my hallway though so I hope you find somewhere for yours.

Wow, this is stunning, haven't crossed stitched in ages... and you did it in Spanish no less. Moi Bueno!!!

You've put in loads of 'woman' hours here Debby but what an achievement and a beautiful picture. It is so Spanish and I'll be there in about 6 weeks ... roll on! Hugs x

Wow, this is gorgeous!

I love this Debby. I enjoy cross stitching too but have so many other things on the go, I can't get to it.

WOW, Like this a lot. It has been ages that I did this. Perhaps time to start again?
Hugs Sinikka

This is stunning. Beautiful image. You have done a great work. Bravo!

Oh Wow! This is amazing, really life like
Lindsay xx

flipping heck Debby WHERE do you find the time this is outstanding! TOTALLY awesome! wow wow wow!! love love love it! :0) and even the pesky trees look fabulous too! wow!! I really think you need to send this picture to the magazine! so they to can share how awesome it is! :0)

Brilliant Debby!! Lots of hard work gone into that but sooo worth it, looks stunning.

Fabulous Debby - I really must pull out my cross stitch and do some, I haven't picked up my butterfly afghan for nearly two years now and was asked at the weekend how it was progressing LOL - the answer was very slowly LOL!!!!!

Well done for finishing a project - it will look fab when framed!!

That is lovely, it must have taken you quite a while to stitch it with the amount of detail. I always think the outlines are the worst to do, but it always amazes me on how the picture comes to life. Hope you are going to have it framed now to show off all your hard work

Beautiful.
you should frame it.

Hi Debby....absolutely gorgeous. I don't know where you find the time.
Debbie x

Oh this is stunning! Well worth the effort Debby, I totally know where you're coming from, I did a half stitch project which took me 2 years to complete!!! And it's pretty small too! I do love cross stitch, but my patience is limited, it just takes me TOO long ;) Well done you on such a beautiful project! Shelly x

Hi Debby. Wow, this is absolutely gorgeous. You must have great patience to do this as it is very intricate. Donna

WOW! Where on earth did you find the time to make such a gorgeous cross-stitch when you make so many gorgeous card! I wish I had your stamina! It's delightful, Debby! Hugs, Lesley

Tell me please, what fabric you sewed? According to the recommendations of the magazine? Is it 11 count?

I have noticed that of all forms of insurance, medical insurance is the most dubious because of the discord between the insurance policy company's need to remain afloat and the consumer's need to have insurance policy. Insurance companies' income on well being plans are incredibly low, hence some organizations struggle to make money. Thanks for the tips you talk about through this website.