Not so Quick and Simple 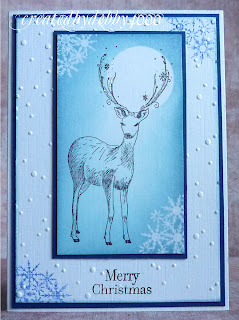 I brought this Penny Black stamp last year with the idea in mind it would make a quick and simple card. It was so quick I didn't use it, so this year I was going to make sure I used it.
I had the idea to use a brayer, yes I do have one. I keep it nice and clean in a box and its a bit like a vampire never sees daylight!
First one in the bin, second same place, changed cardstock and binned that one too.
So out came the blending tools and distress inkpads, I know I have them too.
I tried various combinations of stamping, masking and just when I thought I cracked it I had the idea of snowflakes in the corners. My DD came in the room as I was attempting this and said "Don't you do that first" yep she goes to craft shows and watches demos too.
I used the Crystal Wreath on the corners and embossed them with clear powder and used it also on the white card stock to follow the pattern through.
I used a PB sentiment of a transparent set before I embossed the white card and rubbed an embossing tool over the sentiment to flatten any embossing.
After three hours I had my sample and them made seven more in a third of time. 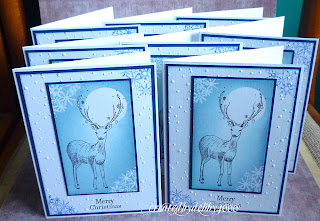 In total 8 not so quick cards but I made up for it with the most simplest of cards but thats for another post.

Hi Debby,simple is not always easy he he

It was worth all the effort Debby - these are STUNNING!
Hugs x

they are fantastic, at least you now have lots of them to show for all that time you spent, I always find it is the working out of the design that takes up the time! hugs Debx

Hi Debby!
Wow these are gorgeous love it all just stunning well worth the time and effort :)
hugs amanda xx

Your post made me smile Debby, don't we all have ALL the equipment, most of which never sees the light of day. I know how you feel about quick and simple too, never seems to work that way but I have to say your final card is STUNNING. Worth 3 hours work! Hugs x

Stunning cards Debby. They may not have been as quick as you hoped by the final result is definitely worth it. Love the colour scheme. Hugs, Denise x

And beautiful they are I think they were well worth all that effort.

I can't wait to hear the next instalment.xxx

Hi Debby,
These are beautifully done. I lov ethe effect you got with the brayer and the image is perfect for this card.
Hugs,
Fiona x

wow Debby!!Gorgeous card, I love the layout and the colours, and the image is sooo cute.
Hugs Trudy

After a loooooong break from blogging, I`m back :)

Wonderful and gorgeus cards yoy have made, and I just love the deer ♥♥♥

Well Debby, maybe it wasn't that quick but is was sure worth it; I love the end result.
Greetings, Frea

Well worth the bother Debby, the finished cards are gorgeous. I have one of those lovely clean rollers too lol.
Pinky

Beautiful card Debby. How come the cards that look so easy can take you ages or not quite turn out the way you want.

Beautiful card Debbie love the colouring and gorgeous design, with perfect details, worth all that effort too :-)

The cards look great, worth all the hard work! Pami x

THis effect is really beautful Debby!

Your cards are gorgeous Debby. The blue/white are a lovely colour combo.I bought a brayer years ago and its still in the same place on the shelf collecting dust!!
Clairexx

It was worth it all in the debby as the final results with your card are....... STUNNING, I absolutely love your latest creation.Thanks for sharing :-)

What a wonderful cards Debby.

Just catching up Deby and love the PATP punch on the PB card, haven't seen that one before. I'm not good at CAS cards either, it seems easier to add more somehow and I always like them better. These are very elegant. Marianne x

These are great Debby ~ easy to post too :) The inking looks fabulous and I love the embossing folder you've used.

Bought a few stamps myself thinking they would make lovely quick cards, never seems to work out that way thoiugh! Well worth the wait then Debby, they are gorgeous, love all the embossing and he is mighty gorgeous. Carolxx

Beautiful cards Debby, the colour looks stunning. And just think of all the techniques you learnt.

I feel your pain from card no 1 but having mastered it, you really have mastered it. These are stunning! Warmest wishes, Lesley

I think these are really gorgeous Debby, I love what you have done with the moon and inks.
Happy crafting
Tracy x

Beautiful cards Debby, Don't give up on the brayer it just takes a little practice and the right card stock you need some matt card stock for using with a brayer its a little slippy but not as slippy as gloss... can send you a little to play with if you want? hugs Samantha :0)

ps... your distress inks ones are beautiful mind! :0)

Hello Debby!
I love all your beatiful cards in your last posts.

They turned out fabulous!!

Gorgeous cards, it may not have been as quick as you hoped but the final result is definitely worth it! Love the colour and the LO!
xoxo Anita

wow these are fantastic debby.i love the image and icy blue colour :D

Simple but so effective - love them.

This is so beautiful, Debby! All of the work that you put into it, paid off!

Glad I'm not the only one who struggles with a brayer - it looks so easy when someone else is doing it. The end result was well worth it and now you've got the knack (you must have after doing the others) perhaps we'll see more inkiness from you.(Else you'll forget how you did it.)
Beryl xx

I have this stamp too and it really is lovely. Ypur backgrounds are really beautiful, I never think to do this kind of thing lol

Glad you persevered Debby because these cards are lovely.
Brayering always looks easy on the TV, haven't tried it myself as I fear the tool will be put in the cupboard with all the other stuff that fills my craft room.
Jenny