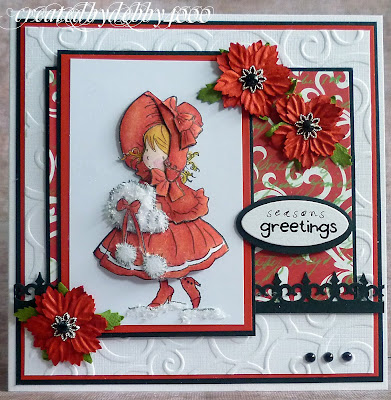 I can't believe how well the black works with this card and still it looks cute, I did try brown since its a softer colour but the black makes the red really pop. I used Bev's fab sketch over on LOTV challenge and of course used one of their gorgeous new Christmas stamps. The paper is from Glitz I think and I didn't like the green on the back so thats why I used a white embossed background.
The poinsettias are left over from last year, the iron gate punch and the jet pearls all to finish. Oh I forgot to mention the mixture of flower soft and fun flock for her muff and snow.
So yesterday we had planned to go to Denbies in Dorking with a detour to the Glitter Pot but my Sis made a surprise visit to Guildford to see our Mum and I suggested we took her to Glitter Pot since she always drives it would nice to drive her instead, so Denbies was put on hold.
It was fairly easy to find the new premises of The Glitter Pot, yes the stairs are a bit of an issue but we managed. It large and airy, nice size classroom but its lost it character but hopefully that will come in time.
I tried to find a pub that I thought I knew where it was but I was mistaken, so I suggested we went home the scenic way to find one which just so happened to past The Crafts U Love (it wouldn't normally but hey I had the directions)
The lovely Suzie was there and we had a nice chat and she showed me what the wonderful Kim had made on their demo day, a gorgeous picture frame as well as a couple of fab cards. Well I totally blame them both cos I had to have the swirls and leaves that was used. It was a magnolia die which when compared with the other makes quite expensive but since I brought two sizzilets in the sale I felt the savings I made paid for it!
We did find somewhere to eat later, couldn't let them stave now could I.

Has anyone else lost comments, I published them yesterday but they didn't show and today they still haven't shown up.
Posted by debby4000 at 7:30 AM

Hi Debby, Gorgeous card! Such a sweet image and the colour combo is stunning.

I love this card Debby - the black, red and white are a fab colour combo and work well with any card. You lucky thing visiting two shops in one day - you're lucky to be so close to them - I hope you didn't spend too much!? LOL. My comments publish immediately and have been fine, so no problems there. Hugs, Claire x

Gorgeous Christmascard!! So cute and the black fence is stunning!
xoxo Anita

Another stunning card, Debby! Love the red and black, and the image is so beautiful! Hugs Nilla x

Debby this is beautiful, I just adore all the christmas stamps from LOTV...I feel a spending frensy coming on myself...lol

That little girl is so cute, I love what you did with the muff...

Hi, Debbie. This card is stunning. I like the colours and the stamp. Lucky you 'cause you live near The Glitter Pot : here in Italy we've just have a few shops of crafting supplies! I've bought something on line from TGP. Hugs. Miria

Totally gorgeous. Love the embossed card and the dp. Love the colouring of the image and the flowersoft/fun flock.

You are right about the black -- it makes this one a real stunner!

Stunning card Debby and such a pretty image...fab whitework too :) Donna x

What a delightful card in every way, your right about the black, bold get still cute.
Sounds like my kind of day you all enjoyed crafting and the pub for dinner, bliss.
janex ps you have tempted me with this stamp

beautiful card. where did you get the pearls from that are in the middle of the poinsettias?
x laura x

Oh Debbie, this is a beautiful card. I use black quite a bit as borders for my images, just seems to make the colours stand out more. What a super day you had crafting away. hugs Sharon

She's gorgeous Debby and yes the black works really well with the red!! Sounds like you had a fabby day yesterday - I am so jealous as I would love to be let loose in the Glitter Pot, it's my favourite online store!! Lol Lynn ♥

Oh Debby this is just adorable,the image is just so sweet,and the black fence really pops out at you.xxx

Thanks for stopping by my blog, Deb. This card is so lovely. The colours are perfect togheter! The image is so nice to. Enjoy your day. Sounds like you had a lovely day yesterday with your sis and mom.

Hi debbie,
This is a classy card. I just love that beautiful image. the colouring is perfect. Gorgeous work.
Hugs,
Fiona x

Colour combo great and the black does work well. Another beauty and another for the Christmas box. Hugs x

Hello Debby - wow, what a great card! I love the fluff! The emblssing, the layout, everything!!

So beautiful card Debby,I love the image and the colours.
So wonderful papers.

Gorgeous card Debby, love your 3d work and the fluffy stuff. Sounds like you can organise a right good day out lol.
Pinky

Hi Debby, wow hun stunning card, love the colouring and that muff is to die for, well I wished I lived where you live, two gorgeous shops local, in my dreams I live their, lol, hugs Liz xx

Hi Debby! Gorgeous card hun, I love the special touches you've added here! Your coloring is always so stunning and I love & need that punch for your black border!!

It's nice to see a cool Christmas card on this hot, hot day!
hugs & blessings!

Debby this christmas card is gorgeous! I love the image you have used and the embossed background
love tasha xx

Gorgeous!! Love how you did her muff, looks amazing! And the black is really nice! ~hugs

Debby your card is fantastic! I love the swirls in the bagground and the black really works wonderfull with the other colours. xx Bianca

I completely agree with you darlin, black works wonderfully with this card, such a clever idea too, had it been me i wouldn't even have imagined black would go, but wow this is such a wonderful card darlin, and that image is just adorable :)

Wow!! It`s an amazing card and i love the sweet image and the way you`ve coloured it!!

stunning card debby.the black with the red is very striking and looks fab.gorgeous image and love the fluffy effect on her pompoms.

So lovely, beautiful and elegant card Debby.
The image is again very lovely just like the rest of the finishing.
hugs Ula X

Gorgeous card Debby, I love black on cards as well, makes a nice frame. Thanks for taking part in the LOTV Challenge and your shop hop sounds like alotta fun!
Clairexx

Beautiful card Debby.
The black really makes the red stand out. Wow! 2 craft shops in one day, you know how to shop! Hope you had a lovely day out.
Love Elaine xx

Gorgeous card, glad you had a lovely day with a bit of retail therapy thrown in, with your Mum and Sister yesterday :) xx

Hi Debby,
How lovely it was to see you too with the family!!!
now what a very stylish card you have made love those flowers and furry muff!! ooer mrs! lol x
hugs
suzie Qx

Gorgeous!! Love these new LOTV-stamps! Your coloring is great! Still can't understand how you make them "pop" and looks so 3D, amazing!!!

Beautiful! I LOVE how you make your images look so 3-dimensional - they are just AMAZING!!

Absolultely amazing card - love the image and the layout is fantastic, especially with the black. Susie x

This is gorgeous Debby, the image looks fabulous, love her fluffy cuffs, the colours are gorgeous together, so striking!!

Seems the WWW is having some issues right now with certain big named email corporations updating their toolbars... crashing everyones computers and websites in the meantime... Just my observations... I hope your comments reappear :)

This is gorgeous sweetie, i love the image that you have chosen and the papers are fab too, thanks for joining us at LOTV big hugs love Pops x x

Stunning creation Debby, your colouration of this adorable image has really brought her to life. Love the embossed background and your beautiful accents.
Thank you for joining us at Lili of the Valley.
Hugs,
Nicola -x-

Debby, this is such a beautiful card. You are right about the black too.