Gem of a Sketch 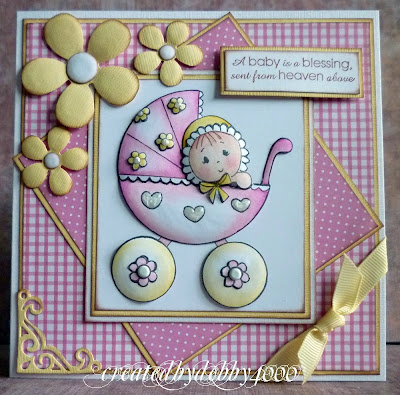 Over on Gem of a Challenge we have a Gem of a sketch, sorry couldn't resist but its true we have a fabulous sketch with the option of decorating the inside.
I've seen some fabulous cards using this stamp so I had to buy it and this is my attempt, pretty sure she won't stay uninked for long. The papers are from  a papermania pack and I put brad in the middle of the wheeels.
I have to confess I rarely decorate inside my card, with all the colouring, cutting out and putting everything together takes a while and by the time I finished, I'm ready to move on.
So I stood back admire my card I made and forgot to the option. I did have a feeling something was missing. I realised a few days later when I went to upload my card, now I know its an option but being on the DT I felt it was my place to do it. 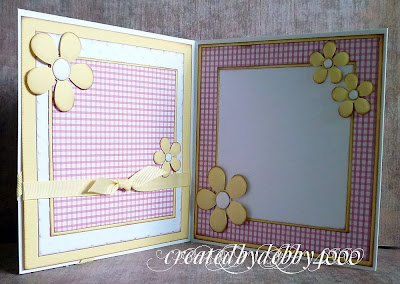 I went back to my desk to discover that the spotty pink paper had all gone and I had one bit of the pink gingham. So I had to gut the gingham so I could use it on both sides. The white square on the right is for writing your message and I embossed some white card to use on the left. Phew I was lucky and I don't think it looks too bad.
Now we have some fabulous prizes this month and I may have to edit this post cos I may miss some. The DT choose the top 5 and all those of you of have used a Pink Gem Design one of you will be randomly picked to win two of Pink Gem Stamps.
Also my team-mate Mandy is having a birthday this month and she is giving a prize of two Pink Gem stamps to her favourite card using a Pink Gem stamp and a prize of two Pink Gem stamps to her favourite card not using a Pink Gem Stamp. Hope that makes sense, I just know it a prize month over on Gem of Challenge.

This is gorgeous Debby and so nice to see the inside all decorated too:) xx

What a stunning card Bebby.
The papers and colours are beautiful.
I love this sweet image, I love this fabulous card.
Have a nice day.

Stunning Debby! Love your colours and detail. The inside is wonderful too xx jenny xx

Hi Debbie
Wow, what a wonderful card! I love how you make your images pop. The inside of the card is amazing.

Oh Debby
this card is just divine!
I love the inside and the outside. It's gorgeous
Love sarah X

OM debby, how cute is this!?! Love the image and the colors...

so pretty and precious.
Love the flowers which you have made.

Debby,
This card is stunning! I hope you can share how you get the dimension to everything! Your inside is adorable with lots of writing space, and pink and yellow is my favorite little girl combo of colors!
Hugs to you,
Pam

Very cute card! Inside is beautiful too
xoxo Anita

Hi Debby,
I so love this cute little image and you've done her proud...I love your take on my sketch...I so relate to you about the inside of the card that's why I thought it would be good to do as an extra...
Gorgeous card..
Mandy xx

AAHHH this is such a cute card Debbie and a great card plan.

Fabulous card,love it .And a sweet cute stamp.

Wowww Debby,So gorgeous card,i love the image and the papers.
So sweet.

wow, this is such a beautiful new baby card, so love the colours! hugs Debx

Oh what a cutie! Lovin the inside too (but I'm waaaay too lazy to ever decorate the inside of my own!)

gorgeous card debby, the image is really sweet and i love your colours and layout.the inside is fab too.luv coops.xx

So pretty Debby. I love the sentiment and the sketch is fab. The inside looks great decorated. I love it when people do that but I never sem to have the time unless it is a really special card. Marianne x

Goodness me Debby it truly is perfection.
hugs chris xx

Oh my gosh, Debby, this is so cute!
Your cards are always an inpsiration for me!

What a beautiful card, I love the sweet stamp xx

Hi! Debby,
Oh your card is perfect,so pretty and i just love your colouring.
All of those so nice flowers too.
hugs Lou.xx

so so gorgeous! Love the pink and yellow together! Hugs Juls

This is adorable Debby. I love the yellow with the pink and the inside looks fabulous too.

Hi Debby,
what a stunner of a card! pink and yellow is fab and what a cute bubba x geez i struggle to put the front together let alone the insides - yours looks fab!
hugs
Suzie qx

That is a gorgeous card, I like the pink and yellow togetjer.

Debbie this is the cutest baby card ever! Beth

Great card & the inside is as pretty as the outside! Is the baby stamp a Pink Gem one? It's fantastic. Jx

Oh! this is one scrumptious card.
Now on my wish list.
Chrissyxx

awww Debbie this is a super cute image....pretty colour combo love the inside..