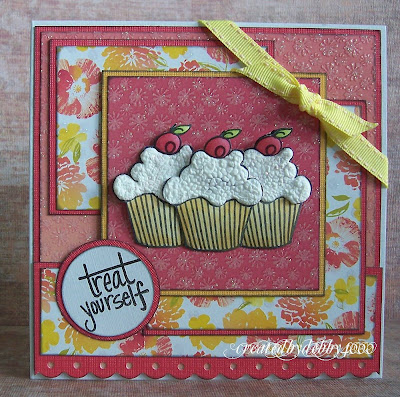 Remember the fluffy stuff I was experimenting with during the week, now you can see what I used it for. Its Woodware fluffy stuff and you just heat it up, before you do you can add stuff like glitter which the camera won't photo, I did think to use some accent beads but they weren't the right colours. The cupcake and sentiment stamps are both from Simon Says Stamps using the Savor the Moment pack. 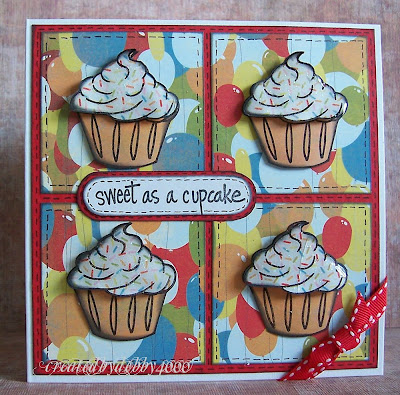 I also used the same stamp set for these yummy cupcakes, I love that BG papers they look like sprinkles, I also used glossy accent for the icing, again the camera doesn't let me photo it but you can just see a crack on the last cake. 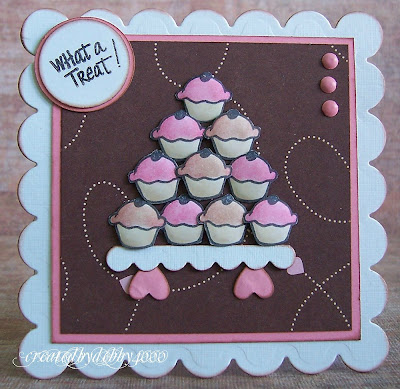 I've been wanting to make one of these shape cards ever since I saw Nikki's tutorial, again the tiny cupcakes are from the Savor the Moment stamps but the cake stand I made with nestabilities square and cut of a strip and a heart punch. 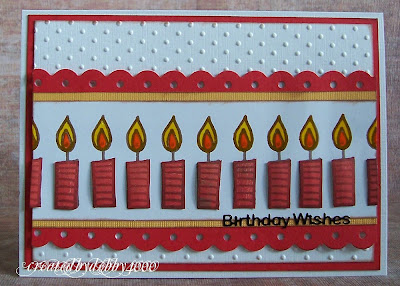 There's also candles on this stamp set, originally I put them on a background of patterned paper but they got lost, so I've settled on clean and simple. 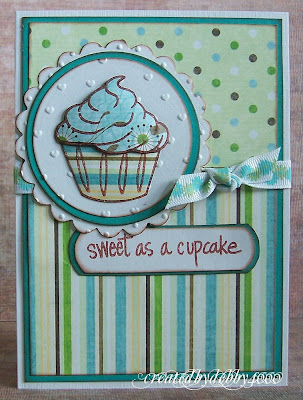 My favourite papers Bo Bunny and this was the very last card made with my scraps and what better than a yummy cupcake.
So how's everyone doing with the Recycling challenge on Simon Says Challenge, there are some amazing creations and I will never think of corrugated cardboard in the same light. The annoying thing is when I was doing DT entry I couldn't find anything now I'm finding something every day, oh well sods law.

They are so cute!
Hugs,Willy

These are absolutely amazing, Debby! Extremely 'delish' (pardon the pun!). I have been toying with the idea of buying that BG paper, and after seeing what you've done with it I think I will! Thank you for yet more fabulous inspiration.
Hugs, Sem x

Hi Debby. Fantastis cards and I love cupcakes. I am coming in june to your lovely England. I will eat them a lot. Jummie!!!

You have been busy Debby!!!
All your cards are very very luvly & the fluffy stuff looks fab,will have to go dig mine out now :o)x

Debby your latest work is all so scrummy yummy I love the litte sprinkles on the cupcake.
Tracy x

Wow Debby you have been busy and what fab creations .... I'm ready for my elevenses now looking at this little lot :-) They are all extremely yummy - love the different ways you have used papers end details with the cupcakes.
Pauline x

these are all so sweet!! i especially love the last one the colour combo looks great.
Tracy x

what a delicious set of cards!
I love them all!

Who doesn't love a cupcake...these are all magnificent.I love how you used your nesties for the cake sand, how genius.. My favorite card out of the bunch is the fluffy one...

What a nice card Debby, you would like them to eat Hmmm

Debby your cakes look go enought to eat, in fact they are making me rather hungry, but I think Id better not succomb. Beautiful cards love and hugs Shirleyxxxx

the cards are wonderful, and the white fluffy thingy is absolutely gorgeous!!
I can totally relate to the "finding stuff and inspiration a week later than needed" :)

Wowzer!! Look at all of these cupcakes!!! Amazing creations as always my friend!! :)

I thought that I had already posted a comment this morning when I saw these your lovely work Debby I love them all they are so scrummy and you have already sold the stamp set to me by creating your love work for simon says stamp lol.
If I post a comment on your blog its says i can be entered for your lovely candy of this stamps set fingers crossed!
Tracy x

Scrummy creations Debby you have been busy.

Yummy cards, good enough to eat. The fluffy stuff gives it a real look, BG papers are delicous too with this set of stamps. Have a great sunday evening!

Gosh Debby these are all gorgeous! the puffy stuff is great...it looks similar to liquid applique...love the altered CD case too, what a great idea!

absolutely amazing cards Debby, everyone of them is simply yummilicious!!! :) ♥

wow Debby, you've been busy, they are gorgeous and your making me hungry looking at them lol hugs Jill xx

wow...amazing cards! so many cute ways to use the stamps!!

I looooove the fluffy stuff! These are great! Thank you for sharing them! Lisa

Oh Debby! Your cupcakes are delish ;)

These are all So Fabulous and Yummy!! I love them all!!..especially the icing on the top one!!..Hugs, Ila

These cards are beautiful!!!

Debby, your blog is inspiring and I love looking at all your creations you make. I would like to award you with a Blog Award as a thanks.

Please pop over to my Blog to accept the award.

Have a good day,

wow these are all gorgeous!! I love them all, in fact my mouth is watering lol

What gorgeous cards - Debby love the fluffy stuff - another thing I'll HAVE to try!

Ooh Debby, how can you make all these cards all so beautiful?? do you have elves?? they all look good enough to eat, I have used that fluffy stuff, on a beer card for the froth and on a few Christmas ones too, it really rises to the challenge!! tee hee! Happy Crafting Suexx

Gosh Debby you have been really busy! These cards are all scrumptious thy are fabulous design and i love the fluffy stuff
love tasha xx

Every card is yummy and gorgous, well done Debby. janex