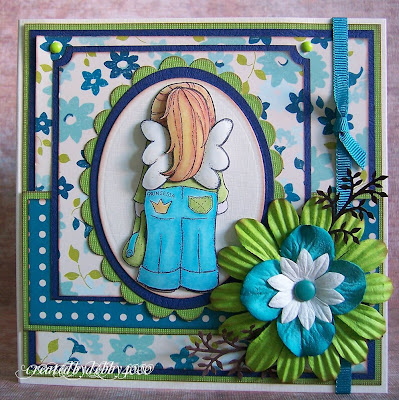 So while posting my Penny Black card yesterday, I got a call from my Sis, Mum had a seizure, Dad had called Ambulance. She had another in ambulance and another in A&E and was very poorly. Sis told me she would be with me in five minutes to take me up to the Hospital, at this point I wasn't dressed. Although very tired, Mum is OK but she has another seizure in the ward and they've given her some drugs to block them but they're concerned whats causing them, so it looks like she maybe in hospital for a few days yet.

Unfortunately when I did come home I had a really bad headache and nothing would shift it, but I did feel a bit better in the evening and I made quick card using some scraps of October Afternoon which just happen to be blue and green which works for the Spoonful of Sugar challenge.

Oh pooh I meant to put glitter on her wings.

Hi Debby,
This is gorgeous, I just love everything about it.
Thanks for joining us this week at ASFOS
Karen x

Hi Debby,
I hope the doctors find out what the problem is and that your Mum is better soon.
I love your card - the layering is so effective.
Clare x

Oh dear hope your mom gets better very soon and your toothache goes. I love your card the colours and dp are great. Love as always how you have layered your image.

Oh Debby I am sorry to hear your mum isn't very well :-/ I hope she makes a quick and full recovery x x

I take my hat off to you !! Making such a fabby card at such a worying time !!

Oh Hun so sorry to hear about your mum, hope she improves soon and they find out what is causing the siezures, look after yourself sweetie.
BTW I love this card stunning as usual
Hugs Jacqui x

Morning Debby...gorgeous card as always,love the colours.
Sorry to hear about your mom...hope she will be ok.
Take care
San x

Oh hun, I'm sorry to hear about your mum, I hope that find out whats causing them soon, big cyber {{[[hugs}}}} to you all!

Loving your card too, fab colours and gorge image, love it!

Your card is beautiful Debbie, I love the papers you have used, so bright and colourful.

So sorry to hear about your Mum. I wish her a speedy recovery. Hope you are feeling better today too. I expect it was the shock and stress of yesterday that brought on your headache.

Good morning Debby, i am so sorry to hear about your mum. My thoughts are with you. As you may or may not know i have had health issues with my dad, he is staying with me at the moment. Its such a worry at times like this. I can't believe your card is a quick one!!! it looks like alot of work to me, and its truly stunning. I wish i could be as creative under pressure!! thinking of you and your family and wishing mum well soon. Hugs Linda x

Oh dear Debby ... so sorry to hear about your mum ... I hope she will be ok when she has rested and the medication kicks in .. it must be a terrible worry. Your card is fab by the way .. great colours and love the dimension.
Take care hun
Pauline x

Gorgeous card ebby again i love the dimension. Thise papers are delish and i love the layout
love tasha xx

Morning Debby, I love the image youve chosen, its certainly a different type of stamp, I love the way youve coloured her and layered her up. Well done love and hugs Shirleyxxxx

Hugs & best wishes to you all.

Oh Debby! I hope all will go well with your Mom! I'm sure they'll find the problem and she'll be just fine.
Your card is fabulous as always,and I hope your headache is gone. Sending you lots of ((HUGS))!

Beautiful card, and I hope your Mum recovers! I'll keep her in my mind!

A lovely card Debby, perfect for the challenge.
I'm so sorry to hear about your Mum, I do hope they sort it for her quickly and that she's soon home, it's such a worry when your loved ones are poorly.

Oh, Deb, I am so sorry about Mom, I will keep her in your thoughts and prayers and hope they find the reason for her seizures.

Headache and all, your card came out beautiful.

oh Debby hope that your Mum is ok and that they find out what is causing the seizures.

A lovely card Debby and thanks for your lovely comments you keep leaving me. Hope your Mum is ok. Shell x

Beautiful card Debby and gorgeous colours. I am so sorry to hear about your mum, I hope they find out what is causing the seizures soon and that she has a speedy recovery

what a lovely card, I really hope your mum will be on the mend soon. Isn't it lovely how crafting soothes you after a crappy day

Just beautiful Debby. Love the colours and the flower arrangement. Everything of the best with your Mom ... I do hope they can pinpoint the cause of the seizure. Hugs from Desire

Beautiful card Debby! So sorry to hear of your Mum's seizures - my Dad suffers from epilepsy so I know what you're going through! I really hope she's feeling better soon!
Hugs, Danielle

Great blue and green card Debby. Hope all is well with your Mum and she gets to feel better soon. And look after yourself too! xx

Hi Debby
fantastic everything on the card.
I do hope your mums better soon.
Hugs Kaylou xoxo

LOve how you pop dotted her ponytail~! Adorable!
Love your coloring too!

really lovely and so wonderful, debbie, loosks so prettty in those colours.
hugs, bea

Wow Debby you had a really stressful day to cope with but have still come up trumps with a fab card!
I hope your mum gets better soon and they find out what the cause is
hugs Tracy x

What a beautiful card Debby,l love the stamp and papers.

Oh dear Debby I do hope your mum is ok..and I hope she will be feeling much better soon...you too!
Your card is gorgeous I love the sweet image and the papers are gorgeous. Debbie x

I do hope your Mum is ok Debby.
Your card is Gorgeous.
Trish (-:

Oh Debby,
I hope things work out for you and your family!!
We love you!
Heidi

Oh so beautiful!! WOWZER!! Love the take on the blue and green colors for the challenge!! :)

So sorry to hear about your mum Debbie, you must be sick with worry. Hope the treatment sorts it all out.

Your card is gorgeous hun. Thanks for playing along at ASOS again.

Gorgeous card Debby, so sorry to hear about your mum, I hope she is getting better.
Hugs
Carole x

It's a shame you don't have a donate button! I'd certainly donate to this superb blog! I suppose for now i'll settle for book-marking and adding your RSS feed to my Google account. I look forward to fresh updates and will talk about this blog with my Facebook group. Chat soon!.