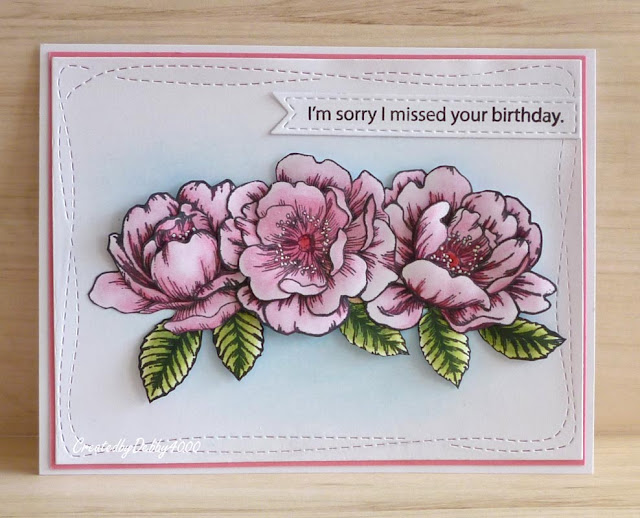 First of all a bit of an apology its bad enough that I'm not posting as often but since having pain patches I seemed to have more off days than on.

I did make this card last week but just didn't feel up to photo and resizing it but its done now. I actually used my Polychromos Pencils on the Simon Says Stamp Beautiful Flowers stamp, these are the individual flowers that came on the stamp set. The leaves come from the cluster of flowers which I didn't stamp well but the leaves were ok. Each flower and leaves were fussy cut and layered.

The background was made using the Wonky Frames from Simon Says Stamp and a dusting of Salty Ocean Oxide and I must of misted some water because my paper wrinkled but I forgot to let it dry and then place under my die boxes to weigh down the creases. That's what happens when you a cheap-skate.

Finally my sentiment is from Simon Says Stamp Messages for Everyday and using their Stitched Banners.

We've brought a black out blind for my craftroom hoping that might block out some of the heat from the window in the door. The jury is still out on that one but the weathermen said the temperature was going to drop 4-5 degrees today much more pleasant.

Gorgeous card. Your coloring is beautiful.

The title is correct, Beautiful flowers, love the stitched die too. I hope the heat is better for you today and I hope your pain is better too Debby.
Faith
x

What a stunner of a card. Simply gorgeous.

I do miss your posts and visits but you must take care of yourself. I hate it too hot as well. This is so beautoful, lovely colouring x

That is a lovely card Debbie! I’ve bought a Arctic Ice for my craftroom which has really helped with the heat!

Beautiful flowers! Just to let you know, I can't get any of the links to work today...fickle Internet! Hope you're feeling better today!

This is so beautiful x

It's amazing you work through pain to create such a beautiful card! Wonderful coloring and fussy cutting!

Ooh your flowers are so pretty, I've had my eye on this stamp set!
Definitely cooler with us today, we'd a drop of rain too for the first time in nearly a month!

A beautiful card and love the colours Debby, and hope you get the pain under better control soon. We have been in the west of Wales for a week and although hot not as hot as here so glad that the temperature is a little lower today as I don't do well when it gets too humid. x