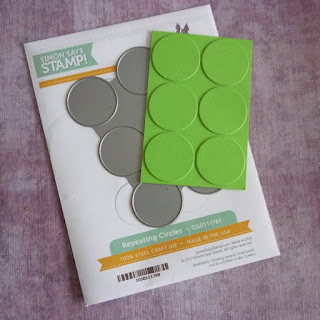 I was lucky to receive a die from the new LOVE release from Simon Says Stamp unfortunately my mojo/imagination was missing since I was suffering from side effects from the new pain meds. All I could think of was Lego obviously been brainwashed by nephew who loves the stuff. I doubled layered the circles to make a Lego block but had no idea what to do with it.

But I did use it for the Picture Book animal dies from Simon Says Stamps, here I've used the Monkey, Zebra and Elephant. I would use the Giraffe but its the most popular die and keeps selling out before I have the chance to buy it. The Cat and Hippo are on the way across the Atlantic, brought the cat especially for his tail and plan to use it with the monkey die. 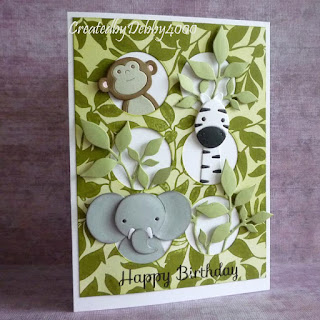 To make my leaf background I used the Simon Says Stamp Leaves Background and blended a bit of green ink in between the leaves. Once dry I then cut out the circles by using the new Repeating Circles. I made the leaves out of the Circle of Leaves  with some green card and had them poking through 3 of the circles. Finished off with a Birthday Message sentiment. 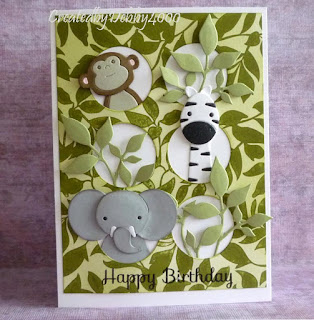 What a wonderful design, love the circles and the animals popping out, great background too.
Faith
x

Debbie, this is awesome! Great background and fantastic animals you placed!

This card is adorable...Love the background and how you used that die cut with the zoo animals...love it all.

All those jungle creatures look so cute, love the way you've used the die...and the lego brick is a brilliant idea! My living room floor is covered in it!
Lorraine x

Clever use of the die Debby and love your cute animals peeking out of the foliage. A really pretty card. x

I think your mojo must be intact, because this card is very clever and super cute. Nice job!