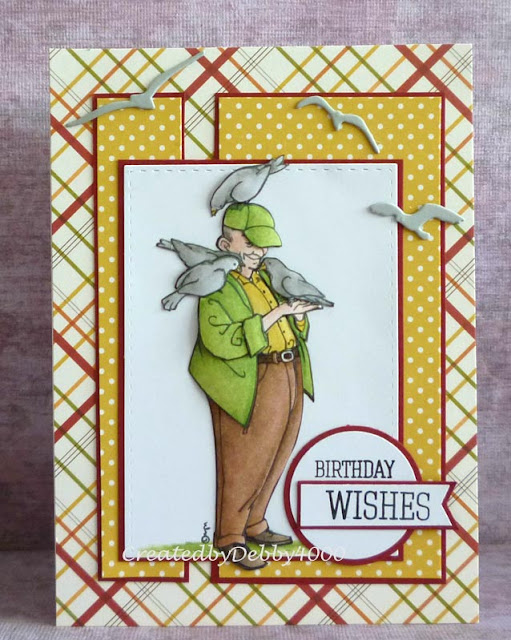 Another quick card, well the card itself was quick, the colouring, fussy cutting and layering still took normal time but I simply didn't have time last week to move paper several times. Found a suitable sketch on Pinterest and knew I was going to use the Memory Box Gulls die.

Sentiment was tricky is didn't stamp direct to paper well so thats why I've a circle punch and banner sentiment, its hiding pants stamping. At least it give a bit more interest.

The fabulous image is from Mo Manning called Pigeons it makes a great mans card, so thats hubby's card done.
Posted by debby4000 at 7:00 AM

Such a lovely image Debby and a super masculine card

This MM image is great and you have made a fabulous card for your hubby with it Debby with beautiful colouring and dimension, and love the die cut gulls and really lovely papers too. x

Very nice card. I love the way you did the sentiment and saved it. Great coloring of the image.

A great masculine card, Debby. I love how you've done the sentiment, if you hadn't said, I would have assumed that you planned this from the beginning! xx

LOVE the addition of the die cut birds...perfect! Well done!

Love the way you did the sentiment. Fab male card

What a great image and colouring Debby and I love those gulls..

babyonlinedress said...
This comment has been removed by a blog administrator.
8/10/17 4:19 AM