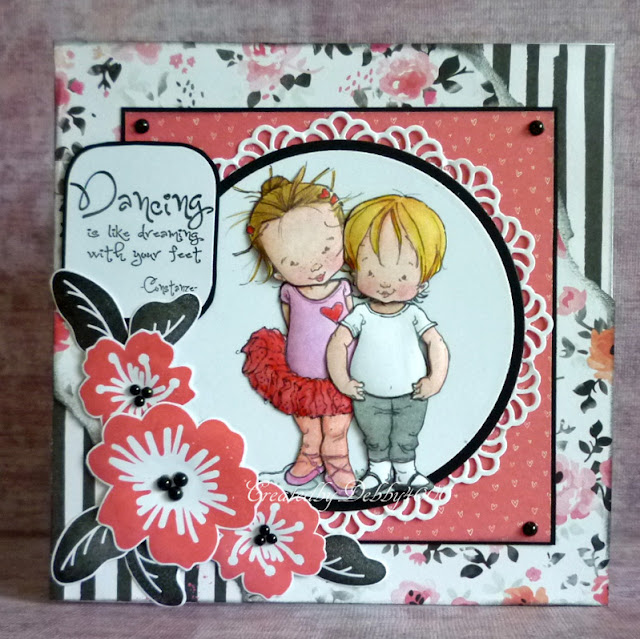 Blast I made this for my niece Verity who runs Frogmore Dancing School and she put on a showcase yesterday but I forgot to take it with me. She had to have so many people to help not sure I was much help but I did get to see the show which brought tears to my eyes watching so many talented youngsters.
I was helping the signing in and out backstage as the theatre she hired were very strict on health and safety making sure we knew who was backstage and making sure they were handed over to parents.
All the proceeds of the raffle are going to Jess Woolner which was over £1000.

Back to the card I think a waffled enough, I've use Fifi and Mikhail that I have merged sometime again but I keep saved so they both can be used again. I tried to follow a sketch which has torn edges but not sure mine worked.

I,m having a bit of a rest day today but I plan to get my hands on some new Mo's images and have a colouring day too.

Debby this is just adorable and I love the wording.
Hugs Desíre {Doing Life}

Gorgeous card Debby sounds like you had a great time yesterday

Hi Debby this is a stunning card the images are so cute. Enjoy your day colouring. Take care. Hugs Jackie

Sounds like this was a perfect card for the event xx

What a fabulous card Debby and just right for your niece with her dancing show. The two little dancers are so cute and I think your paper tearing works well. I adore those pretty flowers and the sentiment too. x

Hi Debby, a very special card for your niece. So nice to
see a boy dancer, they are both so cute. Have a nice day,
Maria x

So sweet! Love your card! xx

Great card hun, and well done to your niece thats a lot of money to take, the card is just perfect for the event
Hugs Jacqui xxxx

What a shame you forgot this darling card. At least your niece got to make a wonderful amount of money, well done her.

A gorgeous card Debby, such a sweet image and lovely sentiment - a fabulous design.
Pauline
x

A gorgeous card Debby, fab image and I love the design
Lorraine x

Gorgeous card Debby..what a shame you forgot to take it with you..

They are so sweet and huggable! A gorgeous card. Hugs, Carol S.xx

I think your card is perfect, Debby!

Oooo how adorable is that sentiment and such a delightful layout too, luv Sam x

Your coloring is amazing!! I have never seen coloring make an image look so three dimensional! really over the top!!!