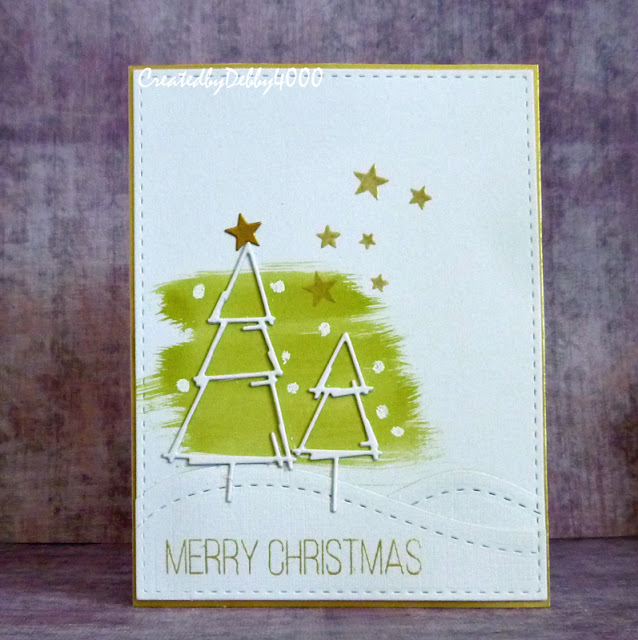 Well yesterday was the day that Simon Says Stamp released a new set of Exclusives and I was lucky to receive some in the post.

These Simon Says Stamp SketchTrees are going to be very handy when I find my mojo or even an original thought but I'm sure the talented Shop DT will have loads of ideas I can steal.

I don't recommend to put the card together with glue then decide to use embossing powder. But I decided to use the sentiment from Be Joyful, also the snow. Can't work out where I got the stars it was a Simon Says Stamp set that had some odd stars. When I added heat to set the powder everything lifted off and the card had to spend the night under some heavy dies to make sure it restuck and laid flat!

Its a gorgeous effect and I love the card but thanks for that tip!!

A fabulous CAS card Debby, I will have to pop over and check these out.
Pauline
x

Great stylistic trees from SSS Debby and I love the swipes of green with the white snowy dots behind them and the gold stars look so pretty. I love the stitched rectangle mat and slopes which give a clean and elegant finish to the card too. x

I love the swoosh of colour behind those awesome trees Debby...fabulous card.

This is beautiful Debby! Love the touch of colour ... so pleased this restuck for you!