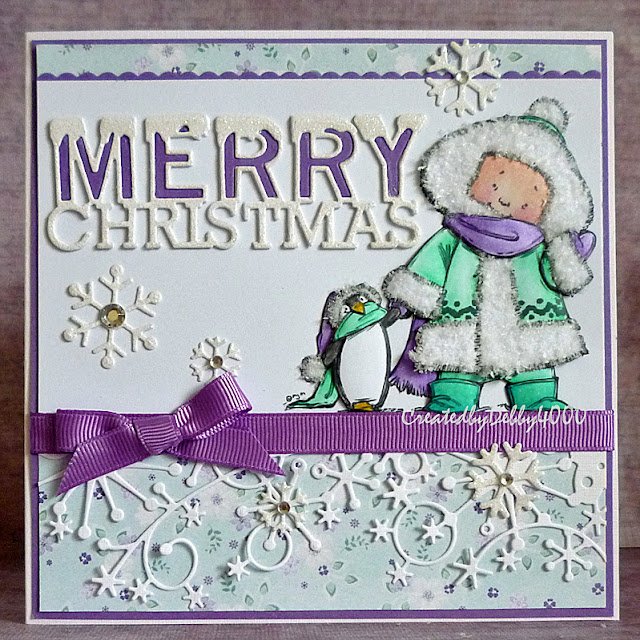 I'm still thinking of Christmas card as you can see and this card gave me the chance to use the Merry Christmas die from Memory Box.
The sweet image is one of Mo's Snow Pals and I've used the LOTV papers. The border is from Memory box now a couple years old but I still love it.
I used some glitter card for some snowflakes and even the top layer of the sentiment. An awful lot of fun flock and flowersoft to finish of the image.
I've been keeping up to date with cards and have a few in my drafts but priority is given to DT and Birthday cards. I've just had to make some mens cards, one was deemed inappropriate so another was made but more of CAS style.

Lovely colour combo, cute image and loving all the sparkle and texture

Super card Debby. Love the image and the choice of colours.
Toni xx

I love these colours Debby and they suit that gorgeous image perfectly.LOVE the Merry Christmas die!! xx

love the colours.. and that cute image . .thanks for sharing.

love the colours.. and that cute image . .thanks for sharing.

Another cute MM image Debby and the flowersoft for the bits of fur is lovely and the pretty colour paper looks great with the snowflake border over the top and the ornate snowy die cut sentiment finishes and gives a fantastic wintry feel to this card. x

Hi Debby.
Another wonderful image and papers so perfect together.
Love how you use flowersoft and fun flock ? for her coat and hat.
Maria x

This card is sooooo pretty and full of fun. The colors are so soft and compliment your beautiful little images, great job!!!!

This is gorgeous, love the image and fab colours
Lorraine x

Playing catch up in blogland ... so many gorgeous cards here!! Hugs Juls

Such a pretty and cute card again Debby.
Gorgeous word die from MB and the older one is still so beautiful......I used the corner die today!!

I love that Merry Christmas die and a brilliant image and great colours, great border die and some dies don't age, and this is one.

Love the Merry Christmas die especially in the colors you used! Great card and wonderful colors and embellishments!

The color combo you used is one of my favorites - especially for Christmas cards. Your image is so sweet and the fun flock made it all the sweeter. Fab card!

A beautiful card, so much work on it has made it so special.

Such a beautiful frosty card :)

Love your card and the colours. Can you please tell
me what colours you used on the little girls coat.
Thanks so much.