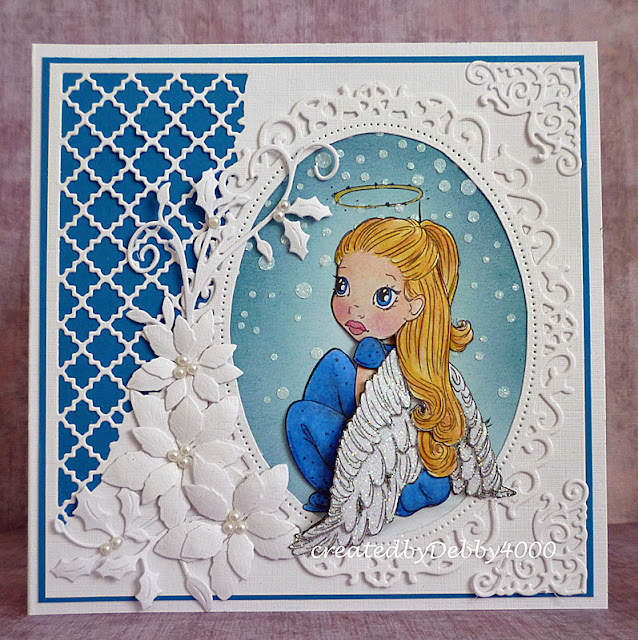 Sometimes you see an image and you just know you have to have it and thats the case with the new Saturated Canary Angel. I did worry about her wings but they worked really well and I even layered them before covering in glamour dust.
I made her background using inks and when dried I added the snowflakes using the Simon Says Stamp Falling Snow stencil and embossing paste and again sprinkle glitter immediately after removing the stencil. I lifted off the paste of the image so when I layered it wouldn't be bumpy
Because I was layering the image it didn't matter that the inks went over the image I just need it so I could place the different parts where I had planned to go.
I had already planned on using the Spellbinder Floral Oval for a frame but once I placed it on white I knew it would be a mainly white card and I remembered the Memory Box mixed media die now I'm not sure of the blue behind it but it down match her clothes.
Of course now I need flowers and the Simon Says Stamp poinsettia was still on my desk so that was an easy chose and Cheery Lyn Holly die. Finally the La La Land corner to finish.
The weather wasn't playing fair yesterday and it drizzled in Littlehampton but it was interesting visiting somewhere where I hadn't been for years. Some things change but the coach stop looked the same and so did the beach car park.

This is gorgeous Debby, such a sweet image and stunning design.
It's a shame the weather wasn't so nice here yesterday, at the moment the sun is out, not sure how long it will last though!
hugs Sue xx

Wow Debby! She's lovely and so beautifully coloured. I love how she's perched in the frame. Fantastic card and wonderful detail.

Gorgeous Debby, I love the image so much..x

Stunning, and such a gorgeous stamp x

A gorgeous card Debby, such a beautiful image and design.
Pauline
x

Beautiful card, love the dimension you put on the image.

This is definitely a wow card Debby and the image is so sweet and coloured beautifully, also love how she is sitting on the edge of the frame and the pretty blue with falling snow and also the blue behind the adorable cut out is a wonderful colour. It is finished to perfection with the corners and the poinsettias and holly flourish enhanced with the lovely pearls. x

Hi Debby, Gorgeous card ! She is wonderful so understand you wanted her and
you have coloured her in beautifully, love the blue and the snow effect in the back-
ground. Also like the Memory box die, Wonder if you could tell me if it is the
" Piestra Tile" ? Couldn't find it under the name given. Beautiful work Debby
Take care ,Maria x

Gorgeous card. Love the pretty angel and your great background and poinsettias.

This is a really beautiful card Debby, perfect in every detail xx

so gorgeous debby.beautiful image and design and i love your blue and white colours ;D

Wow...this is stunning Debby. I love all the detail and your colouring is just....well wow!
Love it hunnie x

A beautiful image and a stunning card. Love the background. Hugs, Carol s.xx

Its called Distressed Windham Collage and from Memory Box.xxx

Now she is Adorable I think she will have to join my Digi Collection. Your card looks Amazing Thanks for the Inspiration.

Lovely Christmas card, Debby. I so admire the way you layer your images. I'm certain it's a lot of work, but it looks amazing!