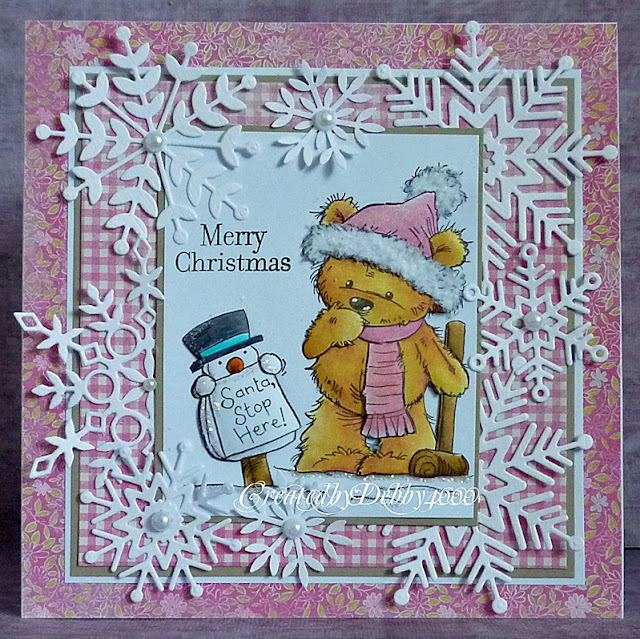 It sketch time on Everybody Art Challenge and maybe I cheated a little. Where do I start first my the mat in the middle is slightly smaller and has be double mounted mainly because the kraft paper didn't show up much.
My idea was to use Snowflakes instead of circles that when I hit a snag, even though I 've used large snowflakes they weren't quite bigger enough and I filled in the gaps with smaller snowflakes. I think my most of my snowflakes are Simon Says Stamp but the smaller ones are the Martha Stewart punch.
My image is from LOTV and the sentiment is Penny Black which is straight, its amazing how you stamp and have your fingers crossed at the same time.
Sorry a bit late turned the PC off and it struggles first thing a bit like me.

Such a pretty card Debby. I love all those snowflakes.
Toni xx

What a lovely card Debby, those snowflakes are totally gorgeous!! xx

This is gorgeous Debby, adorable image, pretty colours and I love the frame of snowflakes.
Sue x

A super cute card Debby, love that image and your snowflake frame.
Lorraine

Another adorable card Debby, love the sweet bear
and all the snow flakes around
Maria x

This is a really pretty Christmas card Debby and the LOTV bear is a cutie. I love all the snowflakes surrounding the topper and the pink and white with the kraft paper is such a lovely combination. x

So very cute Debby...... an adorable teddy and a gorgeous card!

This is gorgeous Debby.
Sue x

Beautiful card Debby love the image so much also the snowflakes they look so effective, a truly wonderful, adorable card.
hugs
lorraine x

I love James the bear and your card is adorable. Love the snowflakes. Hugs, Carol S.xx

Love all of the snowflakes you used on your cute card! Love the image!

Yes Christmas Cards have started and I love this. Lots of snowflakes and Non traditional Perfect!

Love the mix of big and small snowflakes. This is so cute!

This is so cute.

This is one cute Christmas card hun
Hugs Shell xx

Gorgeous card Debby using one of my favourite LOTV Christmas stamps.
Deborah A