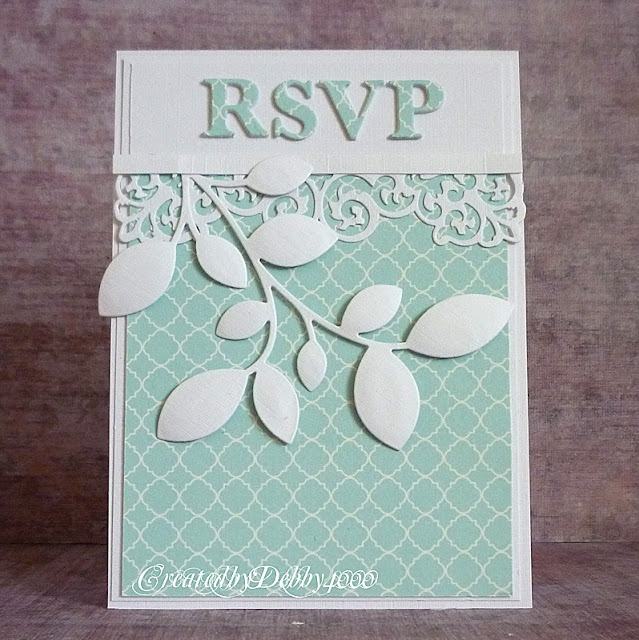 I recently received a Wedding Invitation so I quickly made a RSVP card and was rather please how it finished. First my letters are Memory Box Classic Alphabet Uppercase die and I also used the Simon says Stamp Cluster of Leaves.
I needed a border but I wanted something other than my MFT Crochet Border so I used a Spellbinder Majesty Square but only used part of for my border then I added a plain strip to give a finished look.
The paper was from an Echo Park pack and I used for the letters to bring it all together.
So I thought I would get into the post quickly and found out you had to email you reply, where's the fun in that. So my poor card is made redundant.

Your RSVP is beautiful. Love the colours very much.

Everything seems to be email and text nowadays .. .. but like you I feel a proper "physical" reply is so much more personal and makes for a lovely keepsake .. .. and what about the people who don't even bother with computers?

Have a good day.

This is gorgeous Debby. I love the elegant design and beautiful colours.
hugs Sue xx

This is beautiful Debby, such an elegant design.
Pauline
x

This is a beautiful RSVP card Debby and love the idea of using one long edge of a die for a border, I must remember this for the future as it is a great idea. I think I would send it anyway as I'm sure they will appreciate the trouble you have gone to to make such a pretty reply. x

So lovely Debby! I would send it anyhow - all that work and I bet they would be delighted.

Love your border die with those elegant leaves! Like that you could use your DP for your die cut letters!

Oooo what a stunning RSVP card and something the happy couple can cherish too, Luv Sam x

Send it anyway and show them what they missed. It is beautiful.

Lovely card, pity that you can't use it as a RSVP, but perhaps you could just keep it on hand and add a different sentiment when you need a card in a hurry. Love how you've used part of that gorgeous die, I have that die and will try using part of it too, thanks.

SEND YOUR CARD ANYWAY. It's beautiful and will surely be a keepsake for the bride.

Aww what a shame but it may come in handy in the future, gorgeous card.

I think the bride will be pleased to received your gorgeous card! Very pretty and very clever!

Beautiful card Debby, I would have posted it anyway, it's much too nice not to send!

Fabulous RSVP card! Love the colors - were they the wedding colors?