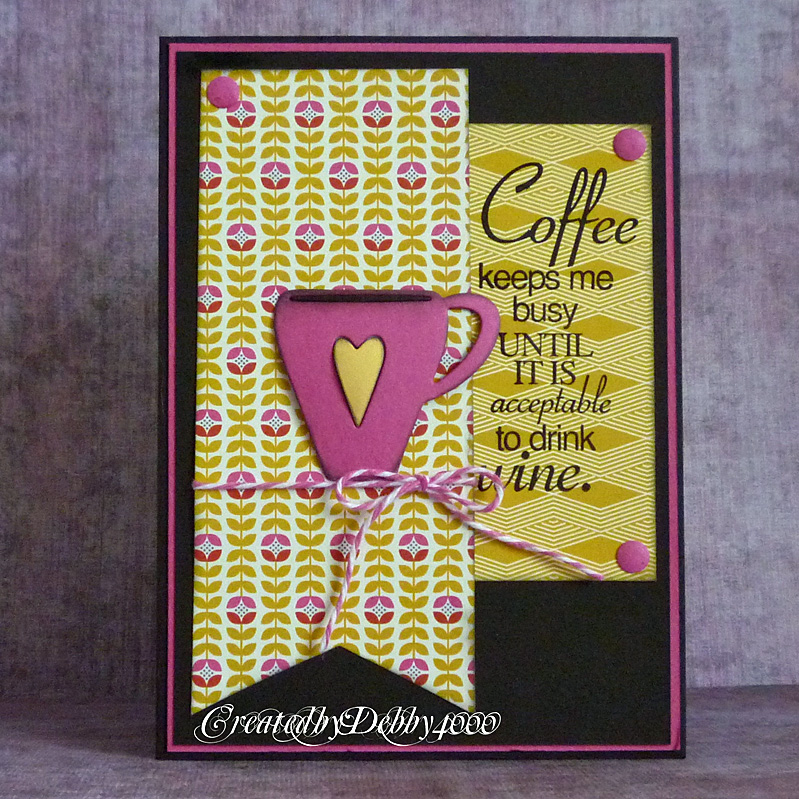 I always feel guity not putting a card up on Wednesday Morning its not till later the post for the Simon Says Stamp Wednesday Challenge is scheduled. But since this card was a really quick one and I wouldn't be able to post it on it own it was that quick.
First of all the Pink Coffee Cup was already cut for the pink heart for another card so it was floating around my desk. Add the new sentiment from Riley and Company which I brought from Simon Says Stamps and some leftover papers from a previous Simon Says Stamp kit. A sketch from Freshly Made Sketch which I've missed the deadline and a bit twine one finished card. I did have to cut out a yellow Coffee cup using the Simon Says Stamp die for the heart. Now I have a yellow coffee cup floating around!
Did you see that Simon Says Stamp Blog is having a hop to celebrate Stephanie Birthday, there's some goodie bags up for grabs but you need to comment on the Blog Hop Blogs.

Great card Debby, love the colors and the sentiment!

Beautiful card!
I loved the design!
Have a nice day!

Oh I would love a mug like that for my coffee....great card hun
Hugs Shell xx

Great card Debby, not sure what you term quick.ha ha this wuld have took me 2 hours with no distractions.....:÷
Love your coffee cup xx

This is gorgeous, such a fabulous design and wonderful colours.
hugs Sue xx

What a wonderful card Debby and I just love that sentiment!! Susan x

This is gorgeous Debby and I agree whole heartedly with the sentiment. I need the wine to bring me down from the caffeine high!!!
Love the fabulous design.
Enjoy the rest of your week.
Hugs Sharon. x

This is fabulous Debby, great sentiment and I love your papers.
Pauline
x

I think the sentiment you used is perfect for me! LOL Great card. Love that coffee cup.

I love the colour combination on this pretty card Debby and the papers are gorgeous. I especially love that pink coffee mug with the yellow heart which complements the background beautifully. x

What a brilliant sentiment, and a great card.

Such a fun card and I love, love the sentiment!

I LOVE it!!! Fab paper and colour choices especially with the black. It's a great sketch and a hoot of a sentiment! Brilliant, Debby! Hugs, Lesley