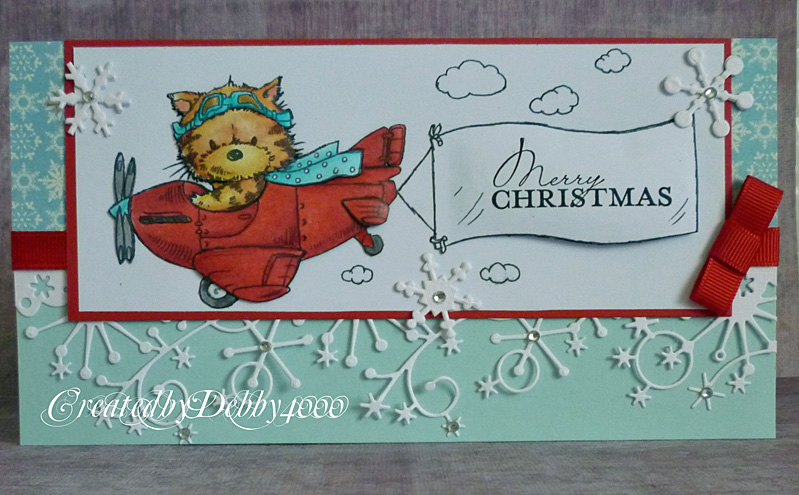 I first saw one of my Carol one of my blogging friends use this image for a Christmas card which I thought was a brilliant idea and hopefully she won't mind but this is my version.
It looks maybe my image size could have been smaller, but it did mean that I had to keep it fairly simple.
I used some snowflake paper for the sides and I cut out two frostyville borders from Memory Box some cutting of one border so it wouldn't overlap and the join is hiding underneather the image. The ribbon has been used to clean up the join between pattern paper and the border.
I used a stamp ma jig to place the sentiment but this is because I use a mounted stamp rather than a cling one. A few snowflakes from the old cuttlebug die.
Thank you everyone for the kind words, both Mum and SIL are feeling better.

I love how you have used the cute image to make a Christmas card and your design is fabulous.
hugs Sue xx

So adorable Debby..fabulous colouring and love the longer card shape.

Love it! Such a fab image, and of course it's perfect for Christmas! He's got a scarf, scarf = cold and cold = Christmas, lol. x

So fab, Debby, love the LO and details!

Very cute :-) the image is adorable and I love that this stamp can be used for any occasion ! :-)

Gorgeous card Debby, I love the image and the snowflakes
Kevin xx

This cute image makes a fabulous Christmas card Debby and love the colours you have used and with all the snowflakes is so pretty. Glad both poorly persons are feeling better too. x

Afternoon Debby what a beautiful card o love the design of it. It's so cute.
Take care

This is so adorable! Great idea to join the Frostyville borderlike that!

The image is so sweet and love that it is a plane...flying over with the good Christmas wishers.

Just catching up after being away. Some gorgeous cards I have missed, love rhe cutie below and this is fab too. Hope everyone is better soon x

You make the cutest cards, Debby! I love this image & your beautiful coloring & clever use of the snowflake border!

Love this card Debby, so very different for a Christmas card.

Hey There Debbie! Long time no visit, lol. Hope all is well on your end your card is so adorable love the image and that awesome die cut.
Hugs, Dangina

Another gorgeous card. Love the image and layout, so sweet.
Lorraine x

Such a great card Debby. I would never have thought to use his on a Xmas card - such a great idea. Love it. Janine (Sugar Nellie DT) x

Such a sweet card Debby, I love your fun image.
I'm so pleased to hear that your Mum and SIL are feeling better.
Pauline
x

Cute! Cute!Cute! I LOve this image and a FABulous design.
Chrissyxx
So glad they are both feeling better x

so gorgeous debby.i love the snowflakes and the image is stunning ;D

I think it makes a super Christmas image, Debby. I love your design and fab colouring. And I checked out Carol's pretty card too! Hugs, Lesley

Oh this is super cute as well, just love everything you are doing x

Awww, this is such a sweet card Debby. LOVE that image - I must add that one to my stash LOL!