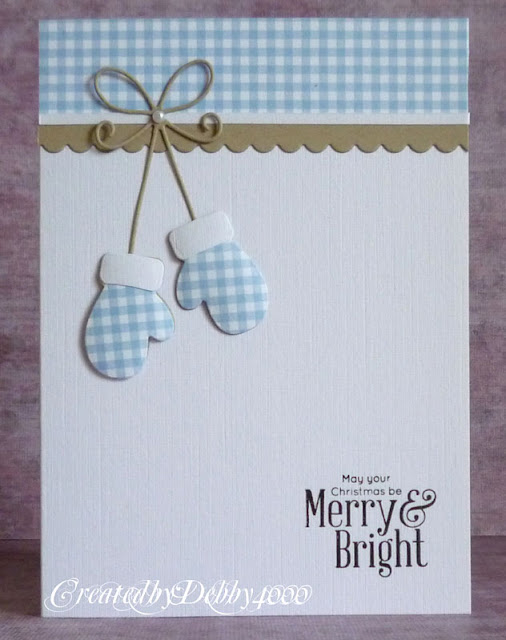 Looking at the cards now I could have easily made them into baby boy cards by changing the sentiment but making Christmas cards were the plan for the weekend. The idea for them was so I could join in with Less is More to use Patterned Paper and I knew blue and kraft worked well together.
The mittens are a Memory Box die but used three times with kraft, white and the gingham. I just used another die the mini scallop from Memory Box to make the top border and with the first card used the Simon Says Stamps sentiment from Merry Trees. 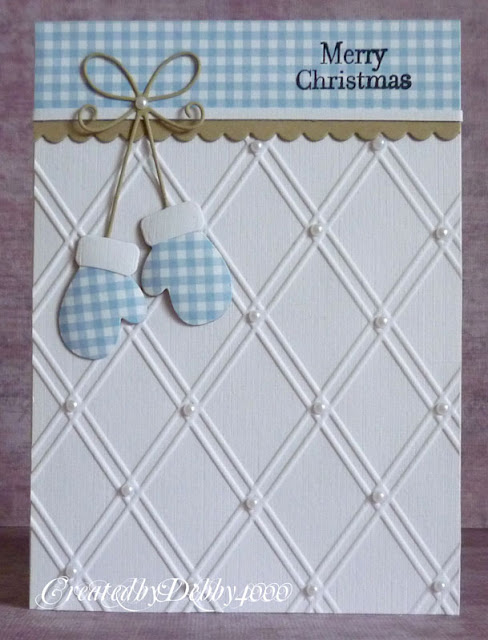 Now the not so Less is More I decided to use the Sizzix embossing folder, a favourite of mine. I believe its from the Hello Friend set. Just added some small pearls to the cross overs and the dodgy sentiment stamped by heavy handed lil is from Penny Black.
In total I made 18 CAS over the weekend but moving my craft stuff has taken its toll and Mr Mojo wasn't co-operating. Not helped that the stamp I knew I had and last seen on my craftdesk in my craftroom is now nowhere to be found.

Both beautiful Debby and I love the spotty one from yesterday, you are doing well with your Christmas cards, you put me to shame!!
Hugs Laurie xx

Ohhh, two lovely CAS cards. They are both so pretty.

Both are fabulous Debby, a great design.
hugs {brenda} x0x

Totally beautiful! I love them both!

Lovely cars Debby, I so like the mittens die, hugs Kate X

Two fab CAS cards Debby. Wow 18 in one day I'd be lucky to make that many in a month! Susan x

so sweet Debby. The design and colours would be perfect for a baby card.

Hope you have a good week and if the weather men have got it right wrap up warm.

So very lovely, both of them! And there's nothing worse than not being able to find something you know you have... Because once your mind is set on it, nothing else will do, lol. x

These are gorgeous Debby, great CAS style, I might use these for inspiration if that's ok with you :) I have a very difficult making CAS cards that don't look like a kid made them hahaha.

I had the same thing with a stamp going missing as well the other day, SO FRUSTRATING! It was a clear stamp, I was thankfully lucky enough to find it stuck onto the back of a bit of scrap paper that I was about to throw away! Maybe if it's a clear stamp for you too, you could check everything else that was on your desk to see if it's stuck to anything.

These are both fabulous Debby, love the very CAS first one.
Pauline
x

OMGosh, I just LOVE these two cards! Adorable with that blue gingham!

these are supercute and such brilliant makes! Thanks for the inspiration Debby xx

What a lovely cards.
Regards, Helen

Two really beautiful cards Debby. The blue gingham with the kraft and white card is so stylish.

Both cards are fabulous, Debby! I love the blue gingham and Kraft! Very eye-catching CAS design!

The colour and simplicity make for 2 very sweet cards.

Oh this is delightful Debby. Your work is always so crisp.

Both are gorgeous Debby x

Your Mr. Mojo looks just fine to me, Debby, what a delightful way to use designer papers on a CAS card.

OMG that was impressive making 18 CAS cards at the weekend, i love the 2, you have here, Luv Sam x

I adore this CAS style but I just can't make them, no matter how hard I try.
White, kraft and blue is a match made in heaven and the gingham is an extra bonus ( I loves me a bit of gingham!)

Fabulous sentiments, particularly the SSS one, I can see I'm going to have buy that set!

They are both gorgeos Debby. Those mittens are so cute. JHope you do make some new baby cards with them too.
Beryl xx

These are both gorgeous. I love them both.
Love Lea x

These are great Debby. You have the ability to make me lust after every die, stamp, punch or whatever you use... the sign of genius!
Thanks so much
Chrissie
"Less is More"

Ooh I love how you've used the mitten die, might have to CASE these :o) Hugs, Lisa x

So gorgeous Deb, I really love the embossed background with the pearls! HUGS :)

These are both fabulous! Love them.

Both of the cards are lovely but I vote for the embossing folder and pearls as it makes the card elegant.

This was a huge fave but SSS didn't have the bloomin' mittens in stock! Hugs, Lesley

I have been sitting here browsing all your cards. First I want to say AMAZING!! I LOVE your 3D images. I tried it once - it's not as easy as it looks lol. And I have a question for you. Can you tell me the name of the embossing folder you used on this card? And possibly where you found it? I keep seeing it everywhere and I love it, but I can't seem to find it in any of the online I shops I have checked.
Thank you and I love your work!
Christine

Sorry, I didn't specify which one - the crisscross pattern.
Thanks again!

Hey! I just wanted to ask if you ever have any problems with hackers? My last blog (wordpress) was hacked and I ended up losing a few months of hard work due to no backup. Do you have any solutions to prevent hackers?.