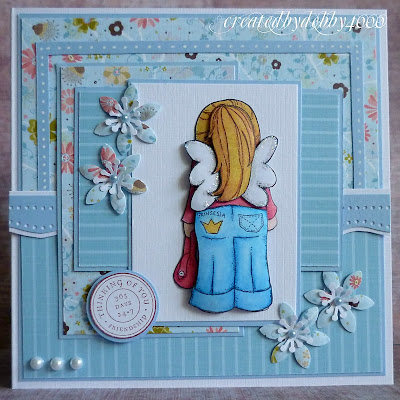 I was going to make her into a Thank You card since there is a few challenges for that but I didn't think this Tilda would work so she became a Thinking of You card instead.
I used the sketch on Friday Sketches but with half a sheet of this double sided patterned paper it was a bit tricky which why I made a frame for one of the mats.
Its Anything Goes on Just Magnolia which I find is harder than a challenge but it works for this card.
I've just had look at the card and it looks a bit wonky, which is really odd cos I've checked the card and its all straight something strange is going on inside my camera.
I was hoping to catch up with all the fabulous entries for the Favourite Five of 2010 but with Hubby home and wanting the decorations down and he's not known for his packing skills, I will have to supervise. But don't worry I shall be checking out every single one, who needs craft magazines when there's amazing talent linking to my post.
Its not to late to join in or if you just want to check how amazing they all are, you'll find the post HERE

This is an amazing card Debby! Looks great! Love the way you always layer your images!
Hugs Kristel

Hi Debby, Beautiful card! Such a sweet Tilda image which is perfect for a 'Thinking of You' card. I love the papers and fab layout.

What a beautiful card Debby,I love the image and the colours.
So gorgeous papers.

Good morning Debby, love the card it's gorgeous as usual! the papers and layout are just fab

A gorgeous card and lovely papers!

Hi Debby,
such a lovely card and the papers are gorgeous very pretty colours x
i too need to get these decs down back to work tomorrow x
hugs
Suzie Qx

Oohh this is so sweet debby.
Love it.

This card is so cute Debby
Hugs Trudy

This card is so cute Debby
Hugs Trudy

Gorgeous card Debby, it looks straight to me, love the spotty frame and colours xx

Wow Debby, I think that's a first (or maybe second LOL), you doing a Magnolia card...love it though! The flower paper is veru pretty! Hugs, Frea

Hi Debby, fabulous card mind you her rear is a bit like mine, especially since Xmas, definitely going to loose some weight. Good luck with the decorators. With love and hugs Shirleyxxxxx

Hi Debby, fabulous card mind you her rear is a bit like mine, especially since Xmas, definitely going to loose some weight. Good luck with the decorators. With love and hugs Shirleyxxxxx

This is stunning Debby I love the image.
Our deckies and tree have just come down the house looks so bare now.xxx

This is just beautiful dear. I just love the older Tilda's don't you. Gorgeous papers too dear. Hugs

Happy New Year Debby another fabby card loving the colours on this one.

Debby, this is just precious and I love how her back is turned!! Too stinkin' CUTE!! :)

Lovely card Debby, she fills her jeans just like me lol. Good luck with the decorations.

beautiful...love all those shades of blue together! Hugs Juls

What a sweetie, not sure I've seen this image before but it looks lovely with those pretty colours.

Hi Debby! First of all, a Very Happy New Year to You!!!
At second, congratulations, Amazing and inspiring Card, love it!!!
Plese, tell me what trade are both of these stamps, please, please: reach_ju@hotmail.com

Wow this is gorgeous Debby I do love that image of Tilda and those papers and flowers look wonderful.
Hugs
Lorraine x

Gorgeous card Debby. Love all the layers and pretty papers and the Tilda image is so sweet.(one of the few that I have myself).
Beryl xx

I like the paper a lot that you used. She is really adorable and the best is that the word princess is written on her trousers. She is so cute.
Hugs Sinikka

Beautiful card, love the colour of the papers you've chosen

Gorgeous Debby! I do love this stamp xx

Hi Debby, gorgeous card hun, love your papers and layout, and do I see that border punch again, not passed it on tome yet then he he, have a lovely night hun, ps hoping to get my five cards on my blog tomoz, lol, hugs Liz xx

Hi Debby. Love the blue theme. Think your sentiment really suits this image. I know what you mean about supervising the decorations. In our house you don't get much help, maybe that's just as well. Donna

Oh Debby, this is so pretty, I love the blue with those lovely papers. And as ever, your colouring is fabby. Happy 2011. xx

This is just beautiful! It would be perfect for Valentine's day also :) It does not matter that it is not red and pink!

Hi Debby I have a little something for you on my blog:

Beautiful card Debby!! Happy New Year to you and your family.

The way you've pop dotted this is genius. love it!

Just adorable Debby and wow how cute she looks with your touch! just darling!
Hope you have a wonderful New Year.
:)Kathy