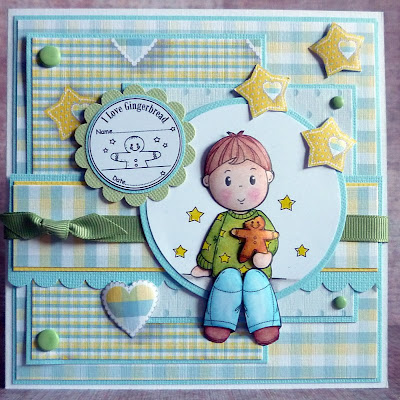 Well its a good job this card was waiting to be posted because yesterday really was a hump day. I've used the sweet gingerbread boy from Pink Gem Designs along with Oh Boy download papers.
Janet suggested to use a texture card to print on, well I use quite a heavyweight linen card that I use to make the actual card and was surprised that my Epson printer quite happily printed on it unlike my previous printer who refused point blank to.
I then used the fab sketch from Friday Sketchers and in the hearts there's a tiny bit of green so I added a bit more green with the brads and ribbon so I can use the card for the Blue and Green challenge on A spoonful of Sugar.
I cut out the stars and heart off the scraps left over and the sentiment is again from Pink Gem Designs.
Well I've discovered another flaw in digi images, I almost made a card when I discovered that the images I had cut out were a slightly different size from each other. You couldn't tell by looking at them but when you tried to layering them it was pretty obvious. So it went in the bin and I decided since this was exactly how my day was going, I'll give up for the day.

this is so cute, Debby.
great sentiment to go with a fabby image.xx

Hi Debby,this is so sweet,and thos digi papers are gorgeous!!!
Hope you have a nice day
Hugs Heidy

well i think it looks fabulous .. love the spring colours .. so fresh
Lisa ;)

This is adorable. He's a real cutie. Love how you make your images "pop out" like that. Beautiful colours. Hugs, Hanna

That is a beautiful card Debby! Marvelous love the colours!
Hugs Kristel

He is adorable Debby. Hugs x

What a little cutie anf fab papers. Sounds like a trying day, hope today goes better. I don;t knwow about you but once I have the digi size right I copy and paste so they should be the same size. Marianne x

Oohh this is a sweety Debby..Beautiful.

Hi Debby Lovely card for a boy,he's a little cutie, like these papers, maybe have to go and have a peek! No what you mean about the sizin of digis. Carolxx

Hi Debby love it! fab layout and love the papers and image another gorgeous card!!!

Hi Debby this is gorgeous I love what youve done with Janets image and the papers are gorgeous to. With love and hugs Shirleyxxxxx

Hi Debby. Beautiful card. Sweet image and sentiment. Nice colours and layout. Love Janet's papers but would need to invest in a really good printer for them and for digi's as want to try them too. Donna

Very sweet card and I love those pastel colours! The heart and stars are so in harmony with the paper!
xoxo Anita

Oooooh this is such a lovely image... I want it!!! :-))
The sentiment is also from pink gem designs I guess?
I'm working on a green/blue card myself too for the challenge, but not sure if I will finish it on time.
have a nice day, hugs jolanda

A gorgeous card Debby, love the image and those backing papers are fabulous.xxx

Love this one Debby - gorgeous colours and patterns together.
Are you going to Esher? I am going Saturday but have spent so much on craft since the new year I mustn't be tempted too much hehe.
luv and hugs {brenda} xoxox

So beautiful card Debby,I love the image and the colours.
Hugs Trudy

This turned out to be a fabulous card!! I just love the pastel colors and all the hearts and stars!!

Awww Debby, you sound like me with your only doing a little card making & a whole lot of craft shopping. I have enough supplies to rival a few craft shops ...
Your card is adorable & I love how you have so much dimension on it. It's just beautiful.
Hugs, Janie

This is lovely Debby. Do you run a ball tool around your images to make them stand out? Lovely xx

Such a cute card & image.

Cute card! If you resize your digi image to the size you want and then copy and paste it, both images will be exactly the same size.

Hi Debby
This is so sweet! I love the way you cut the stars and heart from the patterned paper. A perfect match.
Jo xx

hi Debby,
what a cute card.
love it
hugs andrea

Your card is so sweet! I love your color and paper choice and the dimension on the stars & heart. I never think to do that.

Hi Debby,
This card is beautifully crafted. I love the colours and embellishment and the image is so sweet. Gorgeous.
Hugs,
Fiona x

Such a sweet and so beautiful card Debby! I love very much your little stars!
hugs Ula

This is so cute Debbie. Your coloring is awesome. "Hugs" Carol

Such a gorgeous, cute card,Debbie.
Must admit I haven't noticed that problem with digi images, but I rarely layer them, so may have just missed it.

This is a great card. Like the down load paper. So sweet colours. I hope you will have a better day tomorrow and that all the digi's having the same size.
Hugs Sinikka

Hi! Debby this is so gorgeous, love the stars and he is very cute.
hugs Lou.xx

Sooo cute Debby, with the starts in de the background and those colours. Great card! Hugs, Frea

adorable card debby.the image is so sweet and fab papers and layout :D

Hi Debby, this is a lovely card. The colours look fab and I love the layout. And I love your hearts and stars. Sorry you had a hummp day. Hope things get better. Pami x

Oh Debby this is so sweet.
Hope you have a fab day
Debs xx

Wow Debby I lovethis, fab image and gorgeous papers, it looks great on the card,fab sentiment too, hugs Liz xx

fabby!!! such a great mix of papers, and I love the stars! hugs juls

Hey Debby,
What a sweet card you've made...I like it!!!
Greetsz from Holland...Mieke