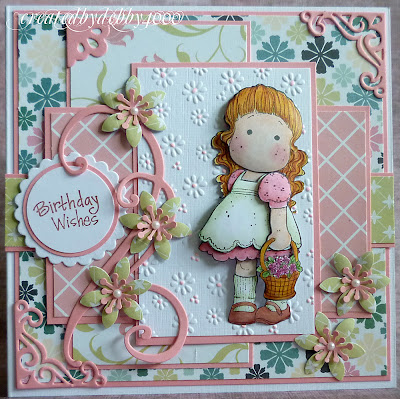 It seems ages ago since I made a Tilda card and can you believe it but I didn't buy the latest club kit, don't worry I've brought a couple but I'm finding that Tilda is like marmite and people don't always like her so I can only make them for people who love her.
But she such an easy image to colour, so while I was having off days I coloured her in and then the challenge on Just Magnolia was for a Pink card to promote Breast Cancer Awareness and although she is not completely Pink but there's plenty of it.
I also used the fabulous sketch from Jacque on Friday Sketchers who herself is an inspiriation beating Breast Cancer.
The papers I've used are American Crafts and the embossing folder is a cuttlebug one, I've dotted the dots with a pink souffle pen, it doesn't show up on the photo but its there.
You can't have a Tilda card with the marvellous magnolia swirl, yes they're not cheap but I've used it so many times its certainly been worth it. Flowers are various punches and the corners are cuttlebug dies.
So I'm at my Sis, so this as been scheduled hopefully (love you Mr Blogger) not only is her PC slower than a snail, her security thingy is outdated and she wants to put a new one on, rather her than me.

I love Tilda Debby, but also find she doesn't appeal to everyone... pity! This is a gorgeous card,as usual, just love it! hugs Sharon x

This is pretty and girly colours. Gorgeous card. Love the colours and LO. Love the image. Goes on the wish list. lol

Wow Debby this card is gorgeous. Wonderful design papers and a fabulous image.
Have a nice day.
Hugs Jannie.

Lol Debby, love your marmite description of Tilda, I like some of her not all looool. his is gorgeous fab layout. Joey.xx

Mr B did his work with your super card Debby

what a lovely card

Beautiful card, such an adorable image and the papers are fab.
Debs xx

Gorgeous card and i like Magnolia stamps a lot.
Greetings Anneke

very sweet card Debby. I too find that not everyone loves the nose & mouthless Tilda!! Though I have no idea how anyone could not love her! Love the Dps and your gorgeous swirl with the blooms ♥

oh wow! this is such a beautiful card. im popping in here quite often, so i just wanna say: Thank you so much for the inspiration. hugs

lovely card Debby, love the embossing and swirl and papers. Really love those corners too, they always finish off a card so nicely.
hugs
Donna xx

Its just gorgeous, those papers are so beautiful Debby.
Pinky

Hello Debby
another wonderful card with soft colours!
I love it!
Hugs Gisela

Hi Debby, it's a shame she's such a love or hate thing isn't it? I love your cards hun, just had a quick peek still got sore eyes so just quick peeping again at the moment,hope you've enjoyed your visit with your sis, have a lovely day, hugs Liz xx

Am loving the swirls ( i must use mine more) and the gorgeous lush papers, Luv Sam x

So wonderful card Debby,I love the image and the colours.
So gorgeous papers and the details.

Hi Debby,
I just love these gorgeous pastel colours. This is a beautiful card and the image is adorable.
Hugs,
Fiona x

What a beautiful card Debbie, I love pink great job.

Ohhhh Debby this is soooo pretty love how you detail the layout its stunning awseome creation.

Just love it Debby :) Did you see my message about the e reader :/?
Hugs Sonia xx

Hi Debby, what a stunning card. I love the papers and your embellishments are gorgeous. Hugs, Denise x

So lovely Debby - gorgeous papers and love that swirl. I'm the same with Tilda, she's lovely to colour but there are only so many people I could use her for! Lisa x

How very pretty!!! Love how you added the swirls and flowers together like a vine! Beautiful!
Thanks for joining the Just Magnolia Challenge this week!
Hugs, Dena

Hi Debby. Lovely soft subtle colours. Cute Tilda image. Only have a couple of Tildas and they haven't been inked. I either forget about them or use other images I prefer. Nice layout and love all your little details. Donna

This is gorgeous! Love it!♥

Thanks for joining us at Friday Sketcher this week!

Hi!Debby this is so pretty,love the pink and the backing paper looks lovely too.
hugs Lou.xx

A beautiful card. Love all the pinks, especiall love the way you have coloured the centres of the flowers on the embossing.

What a gorgeous pink card, Debbie. I am in the same boat. Family and friends are not crafters and are not into the Tilda's and hAnglars. I am working on a pink card for Friday Sketchers but also want to make one for a lady that was just diagnosed and I am having a hard time with that one.
Hope you are having fun at your sisters house.

Such a pretty, girly card Debby. Tilda has grown on me recently, especially when I see beautiful cards like yours, but it still sort of 'freaks me out' because she doesn't have a mouth! xx

Sorry I havent been by in a while, have been having a good old catch up with your blog. Love all your creations that I have missed out on. Happy belated birthday too you looks like you had a fab time at the suprise party !!!.
Lyndsey xx

I am loving this one the colours are fab, so cute hugs Pops x

A beautiful card Debby. I lOVE Tilda!
Have you seen my new blog PINK FRIDAY
I hope you will have a look at it and join in too
Hugs Sarah x

This is so pretty, love the papers and colours and your image is coloured beautifully.
Happy crafting
Tracy x

Really pretty card! I don't understand why some people don't like Tilda either I think she's fab.
Helen x

I love your Tilda, but please...no comparison to that horrible stuff the devil invented - MARMITE! YUCK!!! LOL!

Hi Debby :-) I am CRAZY for this card!!! I learnt so much on this post - I had never seen this embossing folder before - I love what you did with the dots!! And that swirl - I see it often, but didn't know it's a Magnolia swirl....I guess I have tons to learn! LOL Anyways - I really enjoyed your card and TFS....hope all is well!

Wow this is so stunning Debby i love the flourish with the delicate flowers and the beautiful colours! WOW
love tasha xx

Wow this is gorgeous!! The soft colors go perfectly with Tilda and look at all those amazing die cuts!

aww she's cute hun, love the papers and I just adore the corner swirls, I really want that one!

P.S do you mind me asking where you got the corner from?

Oh, Debby, she is a doll! I just adore your sweet card, hun! Love the papers and all the details...love that embossing pattern too! Tilda looks fabulous and I love the 3D images that you make they are just gorgeous!
Hugs,t