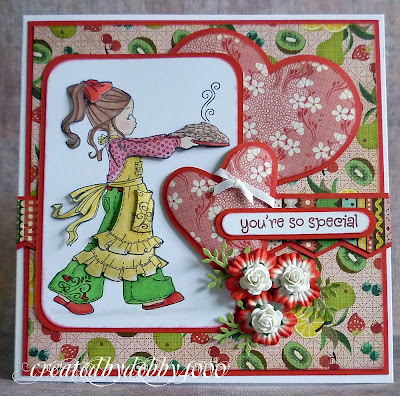 So there I was yesterday cup of tea in one hand the mouse in the other ready to check out everyone's blogs only for everything to go black. Here we go again the power went off and when it came back on my explore thingy wouldn't load.
I just got it working when blow me it went off again but it was so bizarre because the radio still worked and various electrical items were making strange noises. I did check, once I found the old style phone since the handsfree didn't work to find out there was prob with a sub-station.
So finally the power comes on but its mess up the telly and the modem with that I gave up and went in my craft room to make my DS a card.
Can't show that one yet since he hasn't received it yet but I do have this one ready.
It's a card following A Spoonful of Sugar sketch although its a mirror image of the sketch since I thought it would work better with this image. I was a bit worried how the hearts would work but I think it turned out well.
The papers BG Nook and Pantry, the hearts were cut out using the cricut and I've used zigzag punch. The flowers are from Wild Orchid, the flat ones have yellow stalk thingies which I pull out, you don't see the hole it leaves cos the roses hide it. Sentiment it Hero Arts which I got in a Christmas pressie from the very generous Heidi from Simon Says Stamps and they fit perfectly in the stampin up word punch.
Off to MJ Every Moment Matters all day crop tomorrow and I've another secret project which I can do now that Sis is in Spain no scratch that my sister reckons she not in Spain she in Tenerife!

hoi Debby,
you did it again,
what a fab card, I smell the cake overhear, hihih
hugs andrea

your card is so gorgoeus, great colored and details

I love your gorgeous card Debby and yes the hearts work fabulously!Sorry to hear about your electrical problems, but at least it gives you more time to craft! Have a great time at your crop too!
Love Becky xx

Hi debby,
These are gorgeous papers and the embellishments are fabulous. I love the image - its perfectly done and the bright colours of the card are fantastic.
Hugs,
Fiona x

This is perfect Debby! I love the way the papers work so well with your image, FAB!
Hugs Tara xx

This is fab Debby, love those hearts, and you did my favourite thing - cricut and stamping. Looks great
big hugs
~En xx

Oh what a nuisance with loosing your power Debby!
Love your beautiful card!
Such pretty flowers and wonderful detail love those hearts!
hugs
kim x

Hi Debby, what a pretty card, I love the papers and the design, but the image is stunning, youve coloured it so beautifully. With love and hugs Shirleyxxxxxx

Ohhh Debby what a beautiful card! The papers work so well together and the hearts are pretty!
xoxo Anita

I love this image and you have made her so colourful here. I think the hearts look fantastic. Love it. Hope the powers is sorted now. Have a great weekend. Marianne x

Gorgeous card with Beautiful DP Debby,love your take on our sketch this week,Hugs Debbie x

Wow Debby this is so colourful dont know how you make your cards so perfect love it.

This is fabulous,love this image and the beautiful coloring.Wishing you a wonderful weekend,

Dear me, what problems you have been having. Hope all is sorted out now.

Gorgeous card, I love the hearts and flowers, and your zig zag is just perfect.

Totally stunning card as always Debby, love the citrus papers and the image is just gorgeous!! Fabulous detail too x

This is stunning card!

Hai Debby wow she is lovely and i love the hearts they are gorgeous !!!

Hi ya Debby!! Oh I just ADORE this!!! Love the image and your beautiful accents with the hearts and colors!! So sweet!! HUGS

Gorgeous card, Debby! Love everything about it! Hugs, Sem x

Beautiful card, I love how you combine colours and papers.

Wow Debby what a wonderful card! Sorry to hear about your power cuts, hope its all sorted now.
Hugs Lynsey x

Debbie this card is marvelous! Beth

Beautiful work Debby, I like the colors. LG Andy

hi debby,
fab card love the layers on the sweet girl and the papers are great!
Suzie qx

I really enjoyed using this layout. Your card is lovely - love all the layers and texture! Susie x

So beautiful card Debby,i love your image and colours.
So gorgeous papers.

This is gorgeous dear, so love the papers and the coloring is just gorgeous as always dear. Hugs

so so gorgeous!!! Love the fab colours you have used here! such a stunning creation! Hugs Juls

Super pretty!! All one color is very hard. Awesome job!!

Incredibly pretty card Debby, the lovehearts are stunning and so are the flowers :) Donna x