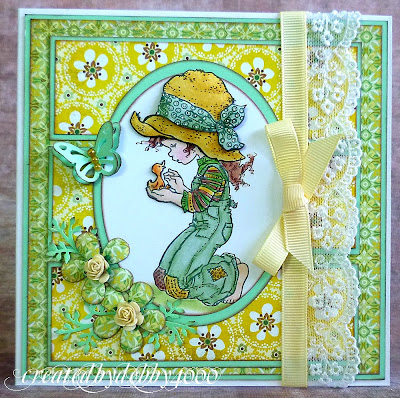 I'm so pleased how this card worked out using BG Origins and Friday Sketchers Sketch this week. I have turned the sketch and used the usual suspects ribbon and punched flowers with roses and of course not forgetting the stamped Sarah Kay image.
I have to report I was disappointed with the Make it show and I really have to think hard whether next year will be worth its ticket price. It is possible we've just got too much stuff and we've been crafting for a few years so we not easily impressed but I still manage to buy some stuff and most of my list was all brought.
So I managed to buy glue, dst, chalkpads, acylic blocks, new home sentiment stamp and not on my list some PB stamp two of which were in the £2 off baskets and a couple of A5 set of stamps from Jenny of HobbyArt and a large pad of Bazzill paper which I now wish I brought more.
Then we popped down to the Art of Craft which is only a hop, skip and jump away from the show, they were having a second hand craft sell, where they sell your unwanted craft stuff and 20% goes to the charity sorry I forgotten which one it is. So I managed to buy some stamps most were PB and Cricut pens so maybe a successful day after all.
If you're planning to go to the Make it Show today unfortunately they've cancelled because they're expecting strong winds.
One thing we did do was to book ourselves on a Copic class with UK Copic Certified Tutors on the 25th April at Farnborough Hants in fact its at the Holiday Inn or the Queens Hotel if you're local. It being arranged by Stamps and Memories so hopefully I will be able blow the dust of my copics.
I've waffled enough now signing off.

Oh just wanted to Wave to Sarah aka Crafty Little Minx, lovely to meet you.
Posted by debby4000 at 8:12 AM

Hi Debby,
This card is amazing. I love the combination of colours and the papers are beautiful. Your image is fabulous and perfectly coloured. I love the butterfly and the ribbon and the lace is gorgeous.
Hugs,
Fiona x

This card is delightful. I keep looking at that Origins paper and I can see I am going to have to commit! A beautifully coloured SK image, Debby, and the perfect embellishments make your card a real treat! Warmest wishes, Lesley

this is beautiful, the colours are very striking!
I found that at ally pally a couple of years ago it was almost like it had lost its glamour lol, I am excited to go this time though, looking forward to seeing your creations with those new pb stamps.

I love this Sarah Kay card. Love everything about it - the dp, your bow and lace. Your colouring is great as usual and I love your flowers.

Beautiful card Debby, the colours are perfect for Spring - just wish it would hurry up and arrive!!
Harrogate is my nearest show, I feel the same about that, last time I struggled to find some nice papers there, although I still spent plenty!!
We are thinking of saving for Birmingham in November, it seems the big companies attend there?
Enjoy your new goodies,
Angela x

Gorgeous card as always Debby. Glad you still managed to pick up a few bargins at the show. I am going to the Craft fair in Glasgow next week & hopefully can get a few myself. lol

Wonderful card ,The colors and the paper are great, and the image...always..cute.

Oh so beautiful!I really love the lace detail.What a great idea with using PP for flowers.Thinking I may have to get me that stamp too...lol.

Absolutely beautfiul card Debby, the colours are wonderful- so bright and summery and i love all the embellishment- great detail!! :D

What a beautiful card Debby,i love your image and papers.

And so you should be pleased with this card Debby, its gorgeous ... I just love Sarah Kay stamps, the colours are just perfect. Claire x

Another beautiful card Debbie, you really have made those papers from the BG set stand out for me and given them justice...they were not my fav from the set till I saw this...
Gorgeous creation
I know what you mean about being dissapointed at the show...like me I think it's because we have so much stuff already...
x
Vicky

gorgeous as always! Love the colours

Love the colors, and the image is so sweet. And your day out sounds like fun, even if you weren't that impressed with the Make it Show...

This is really beautiful, Debby! Love the colouring and the colors and the lace, great card!

She beautiful Debby! I seem to say that a lot with your cards! lol

Your card is marvellous Debby!
I love the fresh colours and the lace and this adorable image is so beautifully coloured.

Ha, I knew you wouldn't stick to your list and would buy some papers and stamps. LOL
I also went to the craftshop last thursday with a list but came home with all kinds of stuff.
Your card is stunning and the colours very bright, we need that with all this droopy weather :-)
xoxo Anita

Hi Debby, what a gorgeous card, love the colour scheme and the image is so beautifully coloured, the embellishments are fabulous. With love and hugs Shirleyxxxx

This is stunning Debby! I love the soft colours! xx

It's stunning Debby! I am really loving your Sarah Kay cards! The images are so sweet and I always love the papers that you choose!
Hugs
Nicola

Oh this is fab Debby, I love the spring colours, they are so fresh

So, So pretty, I just love it, fab stamp and papers.
Happy crafting
Tracy x

ohhh, this is gorgeous Debby, the colours are so beautiful.
luv
Gretha

Gorgeous! What a sweet and wonderful card. I love the colours and details.
Hugs Trudy

This is so beautiful Debby, the citrus colours are fab together and the lace is so pretty :) Donna x

Beautiful card Debby...such a pretty image, thanks for joining us at Friday Sketchers.
I know what you mean about being disappointed at craft shows...the same thing has happened to me just lately.
Carole

A gorgeous card Debby, I love the pretty spring colours you have used.
Sound like you had a good blow out on new crafty stash...and bagged some good bargains too!
Debbie x

Beautiful card Debby, I love those papers, lovely & spring-like.
Looking forward to seeing what you make with your new stamps x

I love the green and yellow, so fresh and springlike! This card is beautiful and that image is so sweet! You work wonders with BG paper--I have several pads, but don't like them until I see your cards--you make them look so pretty!
Hugs,
April

Absolutely beautiful card Debby, the colours are gorgeous and so bright and spring!
I love the colour scheme and the image is so beautifully coloured, the details are fabulous!!!
Wonderful !!!
hugs Ula X