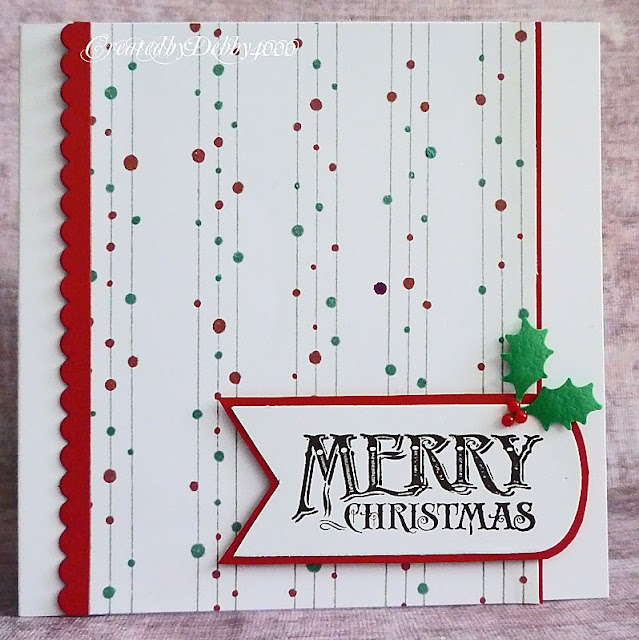 I'm still thinking of quick Christmas cards not sure this ticks the box but the challenge on Less is More is to use a rubber stamp, added that its being sponsor by one of my favourite stamp manufacturers Penny Black. It seemed only right I used one and this one is a slapstick called Circle and Lines its possibly never been used or if it has probably only once. I stamped in grey so it would look more silver and then I coloured them in with glitter gel pens to make them sparkle ( of the camera doesn't pick this up)
I wanted something differen than a fishtail banner but couldn't find one that fitted this sentiment which I wanted to use but found a die with this rounded end and added a Martha Stewart Holly punch just to take the starkness away.
Can't help thinking its a bit boring!
Well I've been awake since 3.30 when I decided I needed to go to the bathroom while there I could hear a funny noise (it wasn't me) but at that moment I was too tired to care till morning. I settled back into bed trying to get comfy when I could hear water like it was raining and it was running into the drains.
My first thought those blasted weathermen had got it wrong again cos no rain was forecasted for today if fact it should another marvellous hot, sunny day.
So up I got to peer out the window, yes the road was wet but not up the road and or halfway down, in fact water was pouring out from under our car on the drive. Yes indeed the water pipe that was fixed last year with the largest hole you ever saw as burst again.
And who is Affinity and what does that have to do with water and whats wrong with just plain Water Board. By this time I'm wide awake I did try to get back to sleep but it will be an early night to bed tonight.

Great card Debby, love the stamp you have used on the background. Hope they fix the burst pipe soon and you manage to get more sleep tonight

Such a beautiful CAS card Debby, certainly not boring! I love the design and wonderful colours
hugs Sue xx

Love the simplicity of this card Debby!
Had to laugh about your funny water story, hopefully it will be fixed soon :)
xoxo Anita

So NOT boring missus, love it! Hugs Sxx

Love that big stamp Debby. I thought it was some gorgeous dp to start with. Like the 'half banner' sentiment plate too.
I hope they get that water leak fixed soon for you.
Beryl xx

Beautiful card Debby, and just right for those bulk card we have to make at Christmas time. Fab colours.

Hope you get the water problem fixed soon, Kate x

This is wonderful Debby so simple and elegant! Hugs Rebekah xx

Oh Im loving this and it looks quick to make too so prefect for all those Christmas Cards, Hope alls Well, Love Hazelxox

Love this Debby! How fabulous!! xx

Hiya Debby.
No way is this boring, it's gorgeous. Simple yet really nice.
I have this paper, have a feeling I have used the other side too, is it blue snowflakes or something else. This side with the dots is gorgeous. Love it.
Debby I have a set of Di-namics dies in the shape of four different buntings, wonder if this would be an alternative to the bunting you have use for the sentiment, it's a really nice set.
Debbiex

Great card. Good luck with the fixing of the waterpipe. Regards Helen

Fantastic CAS card, Debby! Hope you can get your pipe fixed soon!

Oooo what a fabby idea and a great way to use the stamp too, Luv Sam x

Gorgeous card Debby :-) I love the background stamp and with the added sparkle am sure it looks even more fabby IRL :-)

hope they fixed your pipe and hope you have a better sleep tonight !!

I love this card, I once had some paper a bit like that stamp, wish I still had it.

Thanks for joining us this week
Jen xx
"Less Is More"

Your card is lovely...very hip looking!