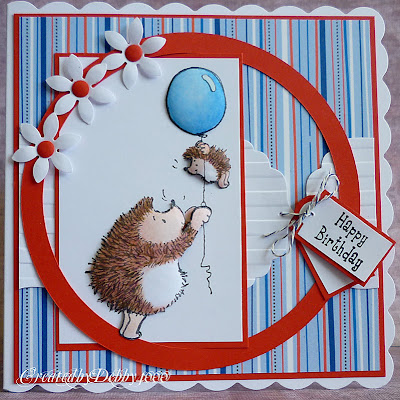 We're are case Kath's card as this week challenge on Penny Black Saturday Challenge. Now I've gone totally opposite of the colours Kath as used. But I've followed the sketch of the card except I had to move the flowers because of Hedgies feet.
I've also used a tall image even though it was a floral one. But I do love how the strip is broken up with like a join. I actually cut out to tags from the cricut and then used the stampin up stripey embossing folder. The tiny tag are from a Hot off the Press stencil and the sentiment is one that I had cut already to fit this tags probably.
Do pop over and check out the team.
I had a successful day yesterday three cards made and it heads down today while I make as many DT as I can.

This is so cute and I love all the stripes....

Loving this creation. Enjoy your Saturday – hopefully with being a bit crafty on the side.
Hugs
Desíre
DS4J DT Member
Digistamps4Joy
Doing Life

This is a really great card ,I love this image and your coloring is wonderful. Have a great weekend.xxx

Another beautiful card Debby. You certainly have made a lot while I have beeen away, I could do with a little of your enthusiasm to get me going again.
Eileen x

Very sweet and great colours for the weekend. Hope you have a good one.

Hi Debby, love it! gorgeous as always! have a great weekend!

Love your card Deby. I love the red, white and blue look. Have a great weekend.

What a lovely card!
Hugs Trudy

Great card Debby, you make them look so easy. I've done mine for this challenge and it's Bad!!LOL can't wait for it to leave the page!!
Have a good bank holiday
Lorraine x

Loooooooooove all the blue and red, and the dimension on the hedgie looks awesome!

So gorgeous card,I love the image and your papers.

This is so cute & I love the red, white & blue theme :)
Have a great weekend Debby.
Hugs
Tracey
xx

Fabulous card Debby and yet another brilliant challenge:)x

So darling! Love the colors and the way the ring intersects with the rectangle. Super cute image too!

So adorable image:)I like all these stripes!Beautiful card Debby:)
Hugs,
Sonia

He is just fab! Love the paper and the embossed card. Hugs Susan x

This is so cute Debby! I love this image and how it all comes together! Wishing you a happy weekend!

As always Debby this is just so beautiful such lovely colours and papers for this fab image! Chanelle xx

Super sweet image. Love the colors. Such a stunning card.

Fabulous card Debby you really have cased it with this lovely image ,xx

so gorgeous debby.i love your patriotic colours and stunning image and design :D

Such a cute image, love it!
Helen x

Gorgeous card Debby, I like the colours.
Kevin xx

What a fantastic card Debby the design is lovely, the colours look great and I so love the image you have used.
hugs
Lorraine x

Two fab RW&B numbers. Love the popping on both and your Mo's boy is simply stunning! Hugs, Lesley

Debby I am oohing and aahing as I scroll through all your posts. You are a master at dimension!