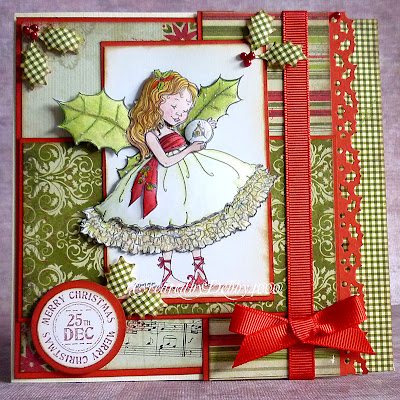 I may have to photo this again since I've taken it with the room light on and its pitch black outside and a lot of help from photoshop. Ok changed photo only marginally better!
I've used the sketch from Sketch Saturday and the fabulous Authentique papers, I've also cut  a strip of the front of the card so the holly border a really old fiskars border punch overlaps the edge over the green gingham that stuck down on the inside of the card.
You can't go wrong with a gorgeous Mo Manning digi image and this Christmas Fairy Holly is no exception.  I've decided to keep embellishments simple and just a bit of ribbon and Martha Stewart Holly Punch.
So far I've made a baby card and two Christmas cards and cut out several magnolia trees.

She is definitely gorgeous Debby...

Gorgeous card, I love the wonderful papers with this cute image.
Hugs
Melodie

this is so sweet! Love the gingham holly leaves! hugs Juls

Oh that's lovely! She is on my "to do" list this week! Fabulous inspiration!

Gorgeous card Debby..love the holly for he wings...

Another little beauty hun, I don't know how you do it - time after time, each one is brilliant! Hugs Sxx

OH this is so so so pretty Debby!

Oh Debby,this is gorgeous even it's a bad picture you can see that the card is stunning!
Hugs Heidy

What a great job did you do. Gorgeous card with beautiful image.

This is beautiful.. i love the traditional colours
Lisa x

Gorgeous card, Debby! I love the papers and the wonderful image! Excellent coloring!

wow Debby
this is sensational card.
Great design and the image look so pretty.

Beautiful card Debby, I love this image, the papers and your design.
Kevin xx

Love this card Debby, great image and your choice of papers and embellies is gorgeoux.
Avril x

Another fabulous card. I looked at this with my 1st cuppa this morning and now 12 hours later and I was certain the ribbon and borders were red but now they are orange, must take more water with my cup of tea.

so stunning debby.your colours are gorgeous and i love the sweet image :D

This is gorgeous sweetie I love this image she is so pretty.

Hi Debby, this is gorgeous! love the image

Wow wow, absolutely stunning!! Love those checkered leaves and berries...everything matches perfectly! Love the traditional Christmas colors and such a beautiful image too! Thanks for joining us this week at Sketch Saturday and Good luck! :D

So gorgeous Debby,I love the image and your papers.

Wow, she is a gorgeous winter fairy - I love Mo Manning images too! I love your gingham holly leaves.
Have a fabulous weekend.
Love, Andrea xx

Wonderful card, thanks for joining us at Sketch Saturday this week.
Hugs, Bente

Beautiful card- love how her holly wings are off the edge of her mount! Susie x

Oh she is gorgeous, wish I was on your Christmas card list! S xx

Loving everything about this one, right down to the gingham holly! Perfect! Hugs, Lesley