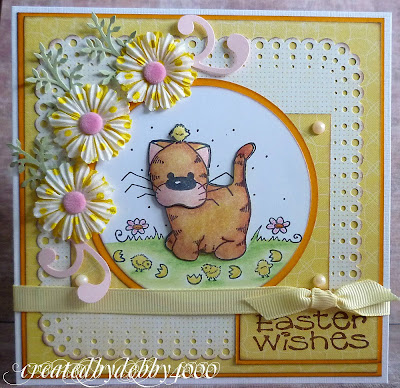 I love this Pink Gem Puddy cat with the easter chicks he's so cute, I used the Stamp with Fun sketch but I missed the deadline, never mind its still a great sketch. I also used my MS stamp round the page punches. I'm not that keen on them but I do like this one and I had it on my list for the Make it show but no-one had one which is a good job cos I managed to get it cheaper else where.
My papers are the DCWV citrus pad nearly all the best papers have been used but there' still a couple I like.
For a change I used some prima flowers and swirls as well as leaves, the sentiment is from Pink Gem Designs too.
I've also used the ticket sentiment also Pink Gem on my secret project which is now not a secret project since I gave it to my sister on Saturday. It's a mini book that I won at MJ Christmas Crop, hopefully I will get it all the photo's resized this week so I can show it entirely over on my other blog All in One Place. If you do pop over, there's a list in the sidebar with categories with links. 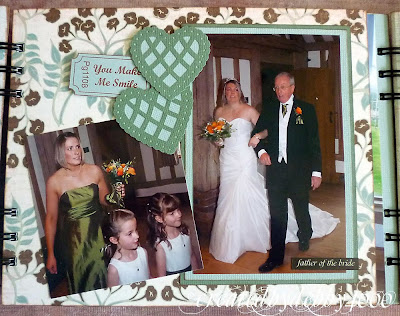 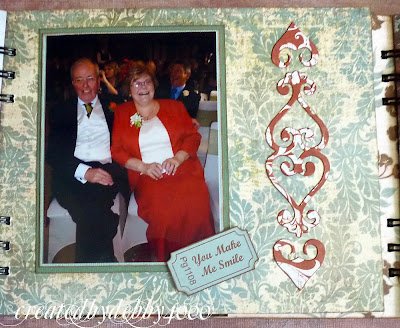 Since the book was already made, I had to take it apart and cut out the binder holes in the My Minds Eye pattern paper, it was the most boring thing I've ever done but it does look better than a cream border. The other problem is that I've got 3 other people's photos so that's a total of 1200 photos to go through to make sure I got the best ones and I forgot to put them in a separate folder on the PC so if I make another for myself I've got to through all those photos again.

What a gorgeous creations Debby.

Such a sweet eastercard!
The photobook is beautiful!!!
xoxo Anita

It was worth it though Debby it looks beautiful IRL.
Mjx

Love your card, it's a real cutie

Lovely card Debby
and 2 FABULOUS scrapbook pages, they look amazing. Such a stunning way to showcase those lovely photos

Have a good week hun xx

sounds like a labour of love, but they are memories to treasure and the results are wonderful. janex

Such a beautiful card Debby!
Love the fresh colours and your punch.
Image is so sweet and details are fantastic.
The scrapbook pages are beautiful, too.

Oh Debby...I just love to see your creations! This is so cute and what a cute image.

Your kitty card is sweet I think your lo is stunning. I cannot fathom redoing more pictures of a theme I already completed a scrapbook on. You are awesome! Beth