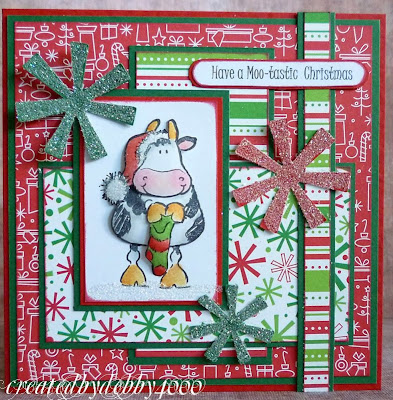 It's a double whammy challenge on Penny Black Saturday Challenge, not only a Man's card but for Christmas too. I so want to put a gem in the middle of the pinwheel snowflakes but it starts making the cards a bit girly but they so need something. The papers are Pebbles, I've only scraps left now but I determined to use them all up. The sentiment is computer generated and I've used an awful lot of glamour dust which I seem to be permanently wearing at the moment.
I loving being a Guest Designer especially has I know an amazing secret but you're gonna have to wait till next week and don't forget to check out the DT amazing creations too.
While writing this I've had a lightbulb idea, buttons!
Off to THE BIG WEDDING today good job the idea of a Marquee was scraped early on because I don't think it would have been there this morning.

This is such a cute image! I love the red and green papers and fun sentiment! I bet you'll be a permanent DT there soon!
Hugs,
April

Morning Debyy this is fabulous and perfect for men:)

Lovely card you made.

This is stunning Debby, love the colours! This really is a moo-tastic card, lol!
Hugs Tara xx

Hi Debby what a fun Xmas card, its not always easy to find a good image, and this one is fabulous. Well done with love and hugs Shirleyxxxxxx

what a gorgeous Christmas-cow! And she is on a fabulouse card :)

OH...Debby, your card is so adorable and so cute!!!!
Have a nice weekend.
Hugs, Mumur.

Gorgeous Debby,everything is always so perfectly matched and your colouring is magnificent!!! Have a wonderful weekend!!

Oh wow Debby what a fabulous male christmas card hun, love those gorgeous papers and this image is fab..love it, have a great day.
Hugs
Tracie :)x

AWWW this is so cute, love the adorable cow, beautiful papers and design.
Have a lovely Saturday.
Hugs, Nancy;O)

love your card so many beautiful patterned papers :o)

fab card Debby and I think buttons would be fab (although it looks fine as it is too). Have a lovely day at the wedding - best hold on to the bride's veil ;) xx

Great male christmas card Debby - I love the image and those papers work a treat! Have a fabulous day at the wedding!
Hugs, Danielle

This is fabulous Debby, I just love the christmasy mix of DP's you've used, and your layout is awesome. The cow??? Oh my, she made me giggle. Toooooo Cute!
Hugs
Lynda

Hi Debby,
I love this one. The reds and greens on the papers are fantastic and that image is so cute.
Hugs,
Fiona x

Great card - love the cow and the sentiment.
Beryl xx

This is Fabulous Debby a perfect male card,Hope the weather holds out for the wedding,Hugs Debbie x

That Christmas cow is so cute & fun, fabulous card!! ~Hugs

Wow what a lovely card, the image is soooo cute! I also love the glitters ;)

Yeah, I love bling too. I always add some kind of flower or crystals to my creations. This is a very cute card!

A great male Christmas card Debby, the image is perfect.

Wauw what a beautiful card !! Love the papers and colours and your image is just perfect !
Hugs Trudy

Fabulous card Debby! I love those papers...and the cow is adorable!
Helen x

You tease you lol. Amazing creation Debby love it. Have a fab time at the wedding.

Absolutely adorble!! Love that cow and your red and green sparkles!!HUGS

Gorgeous card and such great papers. The moo cow is fabulous!!

Lovely card, such a great image, and yes buttons would certainly fit the bill. Have fun at the wedding.
Hugs Debs

Love your male card Debby, this little cow image is fab. And in my book you can never add too much Glamour Dust!
Love Sarita xx

This is do fun!I love your papers! Beth

Love the card Debbie such a cute image. shell :)

te hehehee Love this one really put a smile on my face thanks hunny I needed cheering up! :0)

This is very interesting, You are a very skilled blogger. I have joined your feed and look forward to seeking more of your fantastic post. Also, I have shared your site in my social networks!.