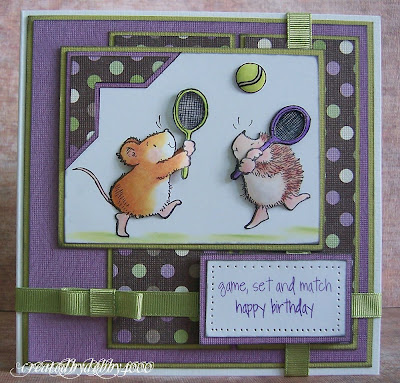 There's a fabulous sketch on Penny Black challenge from Nat and although I pleased with this card perhaps I haven't done enough justice to Nat's sketch so might use it again maybe not with a PB. As soon as I saw these critters with rackets I knew I had to buy it, my Son is an avid tennis fan having played a lot when he was a teenager in fact he was very good till he's knees played up something he blames me for something to do with genes he tells me.
My first problem was the shuttlecock, I had to mask it out then I couldn't find a tennis ball stamp so I had to make one. Then I wanted to use acetate for the inside of the rackets and thought maybe it would be too fiddly but it wasn't too bad. I had no problem choosing the papers the DCWV Latte pack have the perfect wimbledon colours.
Good Luck to Andy Murray and hope my son takes a hat with him to Wimbledon today. I've already made him he's birthday card so I will give this to my DD to give to him. 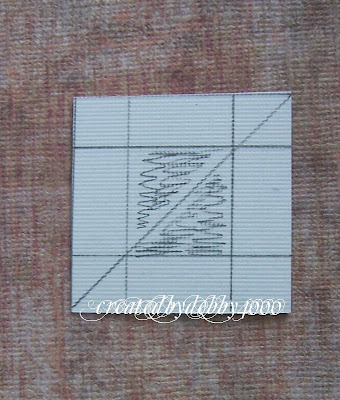 This is how I made the photo corner which are really easier to make and you can vary the size to whatever you want. For the pic above the square is 4cm and I measured a cm in from the edge all the way round then, a diagonal line across the middle which I then cut. I cut out the shaded areas too. 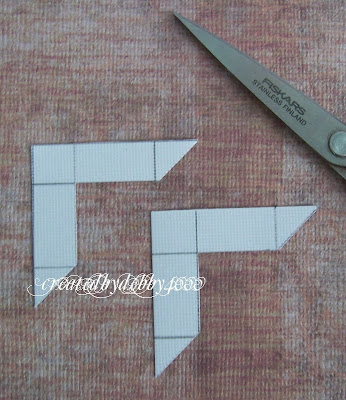 It leaves you a pair of these and if like me, you ink the edges then stick onto a piece or c0-dinating card in the corner then use a ruler to measure, make a border. 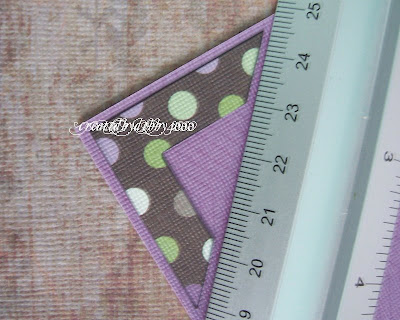 You then cut out the middle leaving a border. I have to thank Ellie at Mod Scraps who showed me how to do this when I first started Scrapbooking. 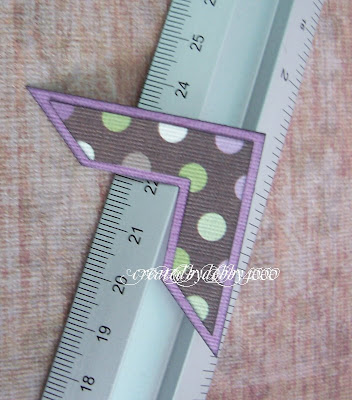 Many thanks to Spyder for the fabulous award.
So in January I hit 50 000 hits which was brilliant but I've noticed my hits have nearly reached 100 000 mark another 50 000 in less than six months so it looks like I will be buying some blog candy at Newbury.

Hi Debby, your card is fantastic. Great little tennis ball you made. Thank you for showing us how to make the corners. Finally, congratulations on your award - I have another one for you on my blog.
Have a great day.
Clare x

Morning Debby,
what a fun card..fantastic !
The stamp is great and your papers wonderful...

Have a nice day.
Hugs
Swaani

fab card Debby I love the image so cute and the papers are great, just perfect for a Wimbeldon fan :o)

This is really gorgeous hun, you make it all look so very easy, perfect hugs pops x x

This is fabulous! Love the image and what a great job you have done with it. Love the papers too. Thanks for the tips on the photo corners,
Hugs Judy xx

Morning Debby, I love your card, exactly the right time to use that stamp. Its gorgeous. Well done love and hugs Shirleyxxxx
The tutorial is brilliant by the way.

FAbulous Card Debby they are adorable, love your photo corners and piercing too. Have a super day.

Debby...I can't believe you've made this card...I've just made an almost identical card...minus Nat's sketch....have a peek on Saturday...he he he!
Love your comment about the owl...you really made me laugh! He is a rather scrawny looking owl isn't he...lol.
Hugs
Carole x

Hoi Debby your card is beautiful!!
and your papers are fantastic.
Hugs Trudy

Hi Debby, wow this card is fab!! I love tennis too, your son will just adore this card, thanks for the demo on those corners, they look great, happy crafting Sue xx

So clever! Love the Wimbledon theme. Colors are great and corners are perfect.

How fab Debby - I love your take on Wimbledon, so cute and made me giggle! xx

Hi Debby
Another fantastic card with such a beautiful image and beautifully coloured.
Hugs Linda

Another fabulous card Debby.
Love the pruple and green papers and that image is just so cute.

Have a nice afternoon,
xoxo Karin

Hi Debby, great job with this one and very ingenious to change it to a tennis card. Thanks for the moral support when I was ill.

love that card and those images are so cute. great!

Great card and how relevant!. My dad has been going home straight after dinner to watch the tennis - it's given me more crafting time. Those are cute images too and thanks for the tutorial.
x Michelle

What a beautiful card!!! Your PB images are adorable and the 3D effect is fantastic! Lovely color combination as well!
hugs
Risa:)
p.s. Congrats on your award Debbie:)

What a beautiful card Debby,l love the image and colours.
So gorgeous papers.

gorgeous card Debby and which one is Andy Murray..thanks for sharing the tip about the photo corners and love how you used the Wimbledon colours...thanks for joining in the fun this week at PBSC...hugs Kath xxxxx

This is gorgeous Debby, thanks for showing how to make the corners, and making it so easy even I can follow!
Barbara
x

Gorgeous card Debbie ... you should have a stall at Wimbledon selling these...you'd make a total fortune!

What a fab card this is and very appropriate lol. Just love that image and your papers love the added ribbon and the sentiment. Thank you so much for your little tutorial on how to make photo corners I will be able to use that technique now.

Wow Debby this is amazing and so "on the ball" with Wimbledon (sorry, couldn't resist that!!) absolutely Thanks for joining in the PBSC this week and for entering my belated birthday candy (of course you're welcome hun ... idffernt week ... diffeerent card ... etc.. :-)
Pauline x

This is a fantastic card and thanks for the tutorial! BR-T

Debby -- amazing card -- in fact perfection! Thanks too for the explanation on the corners.

Debby lovey card and do cute,the papers are fab too xx jo xx

I love this card Debby - I'm such a huge tennis fan too - these guys playing are just too adorable for words! Great job on your tennis ball and I love the layout of the card! Perfect colours too ...!!
Hugs, Danielle

How very sweet Debby!! I love your darling creation and the papers are so yummy!! :) The tutorial on the corners is very clever!! I must be spoiled because I have a photo corner punch!!

Gorgeous card debby and thanks for the little tutorial :-) I will go and make one of these now, that way I will remember it,,, hopefully :-)

Unfortunately we don't have access to the wimbledon tournament !! I would love to watch Andy !! I hope he wins !! :-)