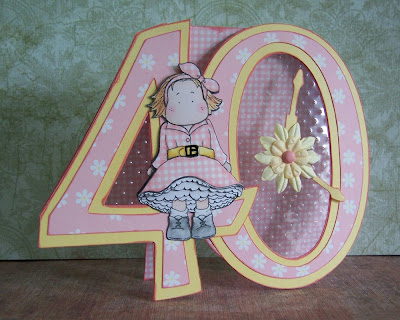 The challenge on Tilda & co has been giving me a headache all week cos I really didn't have a clue, clock hands has been a suggested but you still have to incorporate them somehow so this is what I decided. I cut out the numbers with the cricut and using them as a template made the shape of the card, the papers are really old but are Making Memories which I cut using George cartridge in the cricut. I've used acetate for the inside of the number and run it throughthe cuttlebug with the swiss dots folder, finished off with my favourite Tilda. I do have a bit of a tip though avoid using new chalk eyes they're far too juicy and I got myself in a right pickle. 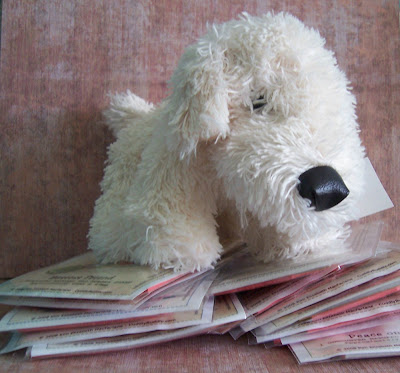 Meet Argyll isn't he cute, he arrived Friday morning wasn't expecting him at all but apparently he comes free when you spend so much money at Cuddly Buddly ( lets keep that a secret since my Sister drops me in it far too often) and the reason I brought from Cuddly Buddly well instead of blaming Fran it was Nessy with some fab Christmas cards using their latest Christmas stamps. 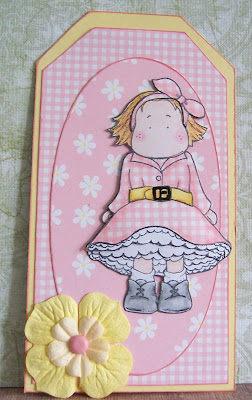 A quick tag with Tilda to add to the others using the leftover scraps from the card, the oval being the shape out of the zero

And many thanks to Kim for this great award, afraid no time to sort it out off to a 12 crop and have to leave very early Saturday morning which is the reason for an extra Friday post and I've still got my Totes to pack!
The weathermen say it going to be warm and sunny Saturday but they've been saying that all week and its been grey, dark and dismal the only consolation is it hasn't rain.

im just admiring all your beautiful cards Debby, you have been busy :) and love the little pup you got with your stamps, he is so sweet, :) x

CUTE. CUTE. CUTE!!! I love the cute extra present you received with your order. How fun! Hope you have a wonderful weekend!!!

Oh my gosh, Debby, your card is too stinkin' cute! Love how you did that; totally adorable! I think your headache was worth it! Love those papers too! What a great idea on the tag to use the oval left-over; worked perfectly!

This is stunning Debby.

Oh gosh how pretty is that clock card love it. I'm a huge cuddly fan can't wait to see the cards you make with your new stamps.

WOW Debby now this is just gorgeous and so unique too! I do love your blog, which I suppose is why I visit daily and I'm never disappointed with what I find.

Debby I just love this card!!!!
What a wonderful idea, you are so clever.
Love the colours!
Julie

oh this is fabulous Debby very creative...oh boy you did have a good rubba buy....lol...have fun playing with them all. hugs rachxx

wow debby this is so cute and such a lot of work has gone into it, I think you have a hit here. Grat Idea and love the soft colours
Hugs Jacqui x

love the 40 card and your tag, have fun with your new stamps Jill x

oh they are so wonderful!!!!

What a gorgeous card and tag!! Love your ideas!! Your dog is so cute too! Do you have to spend money over time to get him or in one order?
Love Becky xx

your card is gorgeous.

thank you for the lovely comments you have left on my blog too.

This is just so wonderful. Love it. Great colours you have used.
Hugs, Moni

wow! just amazing! love the design, the papers and the cute Tilda. Now I dread to think how much you spent at CB, but 'tis easlily done I suspect!
annie x

LOL, that can't be right surely?I'm slipping then, as I've resisted Cuddly Buddly (think you've got my share there, LOL). Must find something to tempt you soon! Wait till I ink up some of my new 'Messy rabbit' stamps from Joanna sheen, hahaha!!!!!!!!!! xx

this card is amazing! and the colour combo is fab too.x

I love the 40 card - and I alos love the idea of making tags using the scraps. I could never be that organized!!
Kathleen