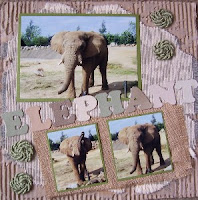 Well I've been to Sunny Spain for a week so hopefully blogger is mended and this will work. Look its let me load a pic this is the recycle challenge on Mod Scraps. I used a pizza lid ( now if you a scrapbooker then you probably got quite a few of these) pulled of some of the cover has shown by Kirsty at Scrapcamp Day Event. The used some of the sample books that DH rescued out of a skip at work. They were soft furnishing books. So that where I got the large piece of material, the letters were from samples of leather sofas, the discs were curtain braids that I swirled together, the sacking aquired from Sis who herself salvaged it out the rubbish bin at her school and a nice bit of bazzill. The photos were from Louise who was a zookeeper for a day at colchester zoo. Now lets see if it will publish.
Posted by debby4000 at 1:25 PM